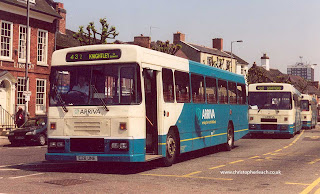 These functional looking former shearings and Timeline Tigers were nicknamed Bosnian Tanks and whilst they were at Stafford in the mid-Nineties I captured three together including at least two on ex-Happy Days routes. One old chap told me after the war before the main A449 was made dual-carriageway he remembers seeing long lines of redundant tanks on the side of the road near Four Ashes and Gailey. I don't think it was these though as their Belfast built bodies weren't constructed till 1986.
You can see more on my website:
www.christopherleach.co.uk/tigers.htm
Posted by christopher at 04:12