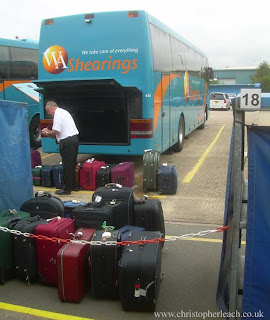 3i the investment bankers who own Shearings have put the holiday company on the market. Let's hope the business goes to safe hands as following it's merger with Wallace Arnold it was left as the only sizeable coach tour company in the UK. At it's large Midlands coach station and depot at Corley near Coventry behind the scenes the driver of coach 401 makes sure all the luggage is safely stowed shortly before departure on another tour.
Posted by christopher at 00:39