A Masterclass in 'The Jowitt Photograph' 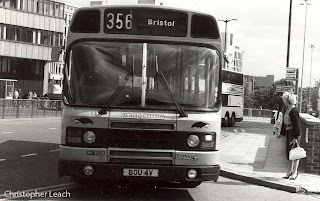 I'm afraid many people looking at photographs regard anything with both a woman and bus in it worthy of the term 'Jowitt'. But as well as introducing us to the genre he didn't get  his reputation and praises for nothing. What most of you miss is Robert's eye for the accessories and delights of female fashion which celebrate their femininity in a way that is exotic enough to be called mildly fetishistic. Sadly most of the time apart from seeing them in uniform or the smart 'business suit' women tend to dress casually rather than to impress these days. No doubt for the real thing the novelty of suspenders and high-heels wears off and it's left to their greatest admirers to on wobbly knees strut their stuff instead, but all is not lost as Fashion is a cycle and it will come round again. At Bristol Badgerline Leyland National2 3529 BOU4V was seen turning into Marlborough Street Bus Station in the Eighties.
Posted by christopher at 02:11 No comments:

Apart from what it says on the front I don't know much about this elderly but still rather smart looking AEC Reliance which was seen passing through a very boarded-up looking Victoria in London during the mid-Nineties. 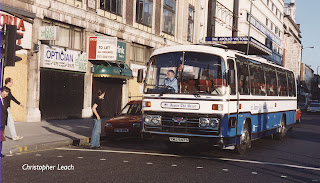 Posted by christopher at 01:41 No comments: 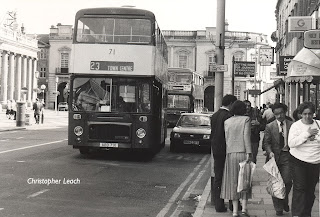 .Northampton bought just over forty Bristol VRT's, most had Alexander bodywork but the last six like ABD71Xwere by East Lancs.
Posted by christopher at 01:53 No comments:

Scarborough: Sea spray on top of a Queen Mary

It's all a matter of taste but Scarborough must rate as one of Britains finest seaside resorts. Also it's long wind and often sea swept promanade has for many years played host to a good variety of open-top buses. One of the finest is a well travelled Southdown Queen Mary BUF425C which seemed to look very much at home in Appleby's colours. Later this bus passed to Wallace Arnold and I saw it at work in Torquay. 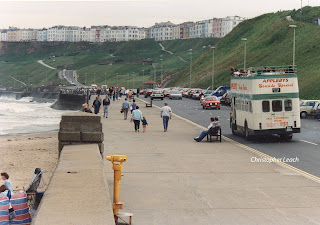 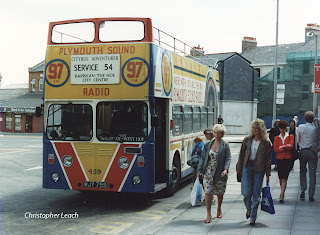 Plymouth had a long tradition of operating open-top double-deckers but that is no more. As well as a de-roofed PD2 accident victim three Atlantean conversions were used. In the Nineties spurred on by the rapid expansion of Guide Friday they seemed to spread everywhere there might be a few tourists. Rather than having to compete they also made local partnerships as what happened in Plymouth. Sadly when Guide Friday sold out so were lost some well established seaside workings such as here in Devon. Though unlikely that was a pity as in this more specialised roll later Atlanteans might still be running today here in service.
Posted by christopher at 11:24 No comments:

Her reign mean't more heartache for the bus: Farewell Mrs.Thatcher: 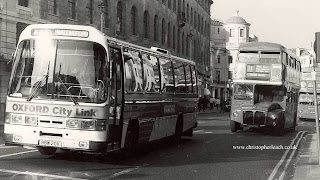 Bus wise I know it had all been going downhill since the start of mass car ownership in the mid-Fifties but there was still a lot to enjoy and believe in during the the Eighties. The likes of Mrs Thatcher believed her upwardly mobile party followers were more minded towards the car and money spent on roads was investment whilst public transport was subsidy. So not only did the bus making division of BL become starved of investment, soon the aggressive cut-throat effects of  Deregulation and the bargain basement sale of assets such as London Buses, The National Bus Company and of course the railways create that mixture of muddled over complicated infrastructure and the rise of those expensive to use big business monopolies we enjoy today that got their toe-holds when that lady sold off so much of the nation's silver. Of course London Transport is best remembered for buses like the much missed Routemaster like RM 2126 from 1965, but during the Seventies and Eighties the trusted and reliable Leyland Leopard became the normal choice for NBC coach fleets like 1980 City of Oxford BBW 20V seen on a commuter service to Wallingford.
Posted by christopher at 02:52 No comments:

KHR 99R: A once rare sight at Tiverton 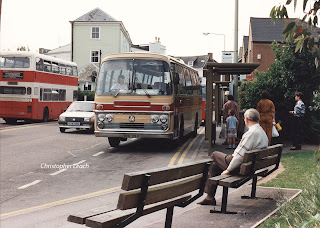 When I took this view at Tiverton in june 1992 it was getting rare enough to warrent a photo of that once ubiquitous thing a rural Bedford on service work. At about the time when KHR 99R was built in 1975-6 the lightweight Ford coach too was starting to lose popularity quickly as the more hurried 'motorway age' demanded heavier more powerful motors travelling more frequently to distant popular destinations like Alton Towers or even Paris Disney.
Posted by christopher at 02:52 No comments: 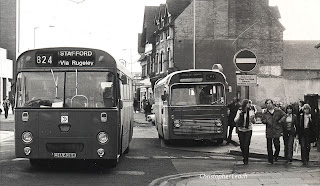 Saturday afternoon used to bring all the bright young things out in Stafford, and perhaps today it's just the same but we just don't notice. By 1980 though BMMO built buses were becoming increasing scarce like S21 which had just returned from a Highfields Circular on the S91. Leopards on the other hand would be around for a good few more years.
Posted by christopher at 06:02 No comments: 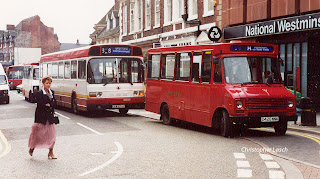 Freshly painted in a more traditional Midland Red livery this very unsophisticated Dodge minibus might have looked quite nice but I feel it was more of an insult to such a forward thinking company. They had a number of these in the town and like the Renaults they were rather unloved by all.
Posted by christopher at 03:23 No comments: 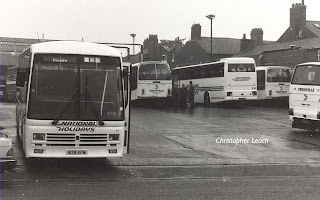 On the parking area at the rear of Crosville's Liverpool Road Chester garage in 1986 was a collection of coaches including a pair of still new looking Duple bodied Leyland Tiger 340 for National Holidays tour work. Instead of bearing the number C68 JTU CTL 68 had taken the old registration from Bristol Lowdekka FSF DFG 68 of 1961.
Posted by christopher at 01:44 No comments: 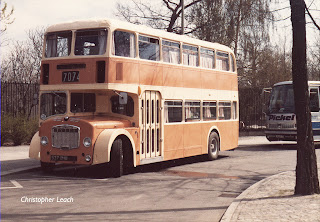 On retirement a few lucky British double-deckers not on found new roles but some even got away and saw a bit of the world. As displayed on it's destination former FLF Lodekka 7174 once confined to the Bristol area and fitted out as a camper got as far as West Berlin in 1982 where it looked somewhat antiquated alongside some of the more modern visitors at The Zoo..
Posted by christopher at 02:06 No comments: 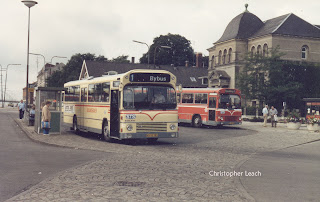 To the south of Denmark lies Lolland and Falster two small islands separated by a small channel. On Falster there is just one town called Nykobing  but in 1982 one could have believed they were on Lolland next door as the local bus service were operated by the local railway company called Lollandbanen. In 1982 the nearest newer cream bus was in 'town' colours whilst the other Aabenraa bodied Volvo was a country bus.
Posted by christopher at 15:00 No comments:

Once worked with half-cab double-deckers so not very exciting by Hardwick's standards was this Wallace Arnold Leyland Leopard KUM511L seen in Leeds painted in their colours for service work. 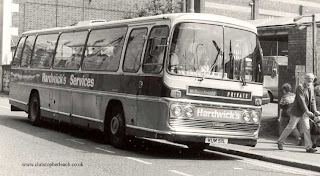 Posted by christopher at 11:50 No comments:

How it seemed those pesky rattling minibuses would be here for ever, but alas almost as quickly as they arrived the disappeared again. There was some variety  too like this former M&D Mercedes that found it's way to Stafford and C218EKT looked both quite smart and much brighter than the buses of today in it's much more sunny red and bright yellow Midland Red North livery. At the time the whole pedestrian main street and it's area was being redone to make the town better I suppose. 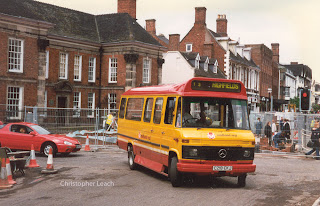 Posted by christopher at 03:50 No comments: 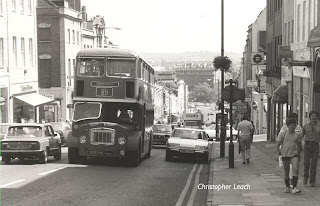 There is plenty of time to photograph Bristol Omnibus 7140 as it plods it's way up from the city centre heading for Southmead.
Posted by christopher at 03:25 6 comments: