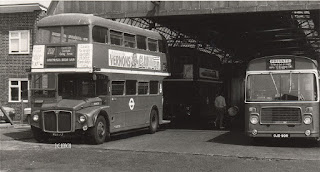 The red bus garages on the fringes of London held a certain fascination, maybe it was because some of them like Uxbridge were quite small and as a teenage spotter one surmised that being more distant these buses would be the ones one didn't see in the centre. That was true of course but they usually worked at least one route which took them into the central zone even if it was only Routemasters like RM 77 to Shepherd's bush. A new much bigger garage was built here but this the old one housed just over fifty buses a number which would be quite decent for a provincial town but seemed like almost an outstation compared to some of them like New Cross.
Posted by christopher at 02:01

I took a photo of a BL class in front of the LT Uxbridge Garage in July 1981 and am currently trying to locate on Google Earth the site. Im presuming its on Oxford Rd in Denham but I cant determine where. Can you help. I am English but have spent the last 62 years living on the other side of the world. You can see my photographic efforts at https://www.flickr.com/photos/80179083@N00/with/49881954501/

Well Ive been given assistance and the two story next door is still in existence as HSS Hire Shop. Looks to be original condition except for a facing applied covering the second floor