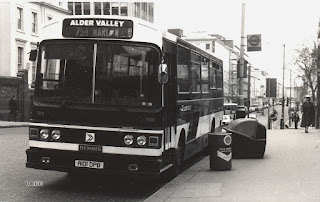 The NBC bought a few trial buses over the years including this Wadham Stringer Vanguard bodied Dennis Falcon. Maidstone and District and Potteries was where these buses were normal worked but I expect Alder Valley was chosen because it was close to the factory at Guildford. It had dual-purpose bodywork and was a regular visitor to London in service
Posted by christopher at 13:59 No comments: 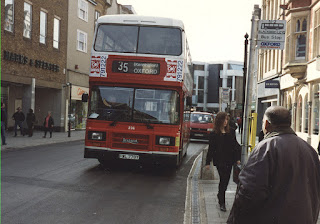 Of the former NBC companies City of Oxford seemed the most reluctant to drop the old poppy-red and white image. Rather like Greater Manchester buses who liked to add it did slowly evolve and by the time I took this Leyland bodied Olympian it had gained a black skirt and white roof.
Posted by christopher at 14:04 No comments: 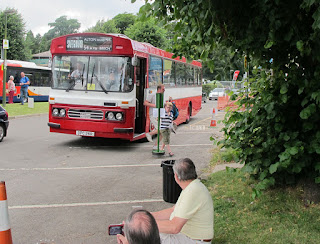 Of course when we travel a long way to a bus rally we appreciate the others too but really I expect most want to see the local buses on display or better still running about. Alton which we visited in 2017 was just inside Aldershot and District territory as is Guildford home to Safeguard one of the best known Independents in Surrey. For a time it liked and bought new  Leylands for coach and bus work including this Duple Dominant bodied Leopard painted in the kind of livery I much prefer compared to what's mostly on offer today.
Posted by christopher at 05:22 No comments: 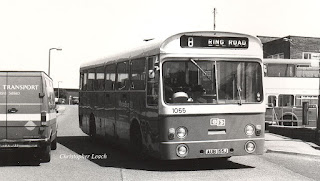 I used to deliver electricity meters, relays etc with my van for GEC and some of the meter test stations were well placed to do a bit of bus photography after I had finished my deliveries. As well as some good places like Norwich, Liverpool and Southampton I even had to deliver right opposite the WYPTE former Leeds City Transport garage at Seacroft and what's more I got a tasty cheap subsidised canteen lunch at YEB as well. Coming out of the garage was a Roe bodied AEC Swift which by 1980 was probably nearing the end of it's days.
Posted by christopher at 01:40 No comments:

The Bus Delights of Rugeley

I'm not being tongue in cheek when I call this the delights of Rugeley for just like Cannock there was a period at the end of the Eighties when it was alive with bus interest and diversity.  Of the local Midland Red North coach liveries I think the claret and white Chaserider livery was the nicest as worn by this Stafford based grant-door Plaxton Supreme bodied Leyland Leopard. It had only just arrived and was the first one allocated in the county town.  Another one this time with the unpopular Willowbrook 007 livery but in a quite different yellow ME Midland Express livery hides behind a shelter. Next to it  also from Cannock and of interest is DRC 543J an Alexander bodied Daimler Fleetline which came from smart NBC neighbour Trent. Icing on the cake would have been a wonderful Warstone's Green Bus half-cab Leyland PD3 bound for Wolverhampton but there are a couple of former London DMS Fleetlines with Stevenson's and in blue a former Edinburgh Atlantean with Key Coaches. Sadly by this time Middleton's had gone but Stevenson's prototype ECW bodied Olympian might just turn up at any moment as that was allocated at their small garage here too.
Posted by christopher at 16:39 No comments: 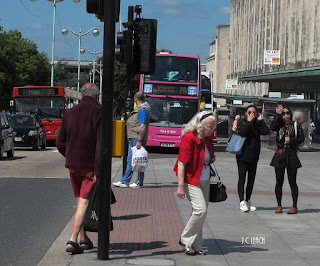 These two girls look a bit out of place in Plymouth with it's Royal Navy, hot pastes,  First Barbi pink park-and-ride buses and even dollops of homemade warm sunshine. However even the most vigilant of CCTV operators would dismiss these two with their shades as they looked a lot more 'cool' than menacing.
Posted by christopher at 08:02 No comments: 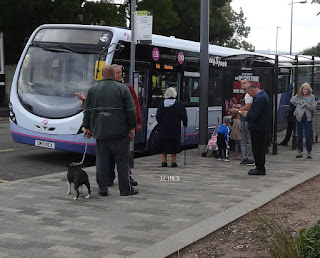 People and a driverless bus in Hanley. The buses with First Potteries have a better age pofile than used to be the case but the registration letters show that they have been cascaded down lke this Wright Streetlite with a scottish marque. First might big one of the big three UK bus operators but the fleet number 63101 gives the wrong impression somewhat.
Posted by christopher at 13:45 2 comments: 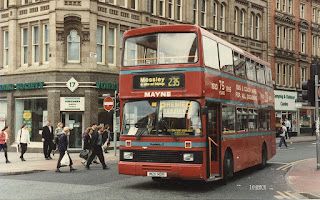 For many years Mayne was the only Independent to operate into central Manchester but of course Deregulation changed all that. However it remained one of the best with a mostly modern fleet of buses like this East-Lancs bodied Scania painted in the old livery to celebrate 75 years in 1995 and seen turning out of Oldham Street into Piccadilly.
Posted by christopher at 16:27 No comments:

Arriva: The Jewel That Rattled 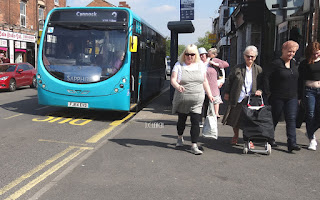 Unlike my home town where people tend to be if not unfriendly a little bit  too reserved, when I used to do various pick-ups for Top Travel to take them to the airport those who lived along the A5 corridor in places like Cannock, Burntwood and Chesetown even though they had never met before used to chat together freely like they were all part of some big happy family. I think most would have thought this community spirit might have died out now that most people don't visit their local pubs, travel more and hide in cars but I think because of the changing world around them and the ethnic with different customs force these working class communities to stick together as before. Of course that is a good thing but it might take the opposite effect if one is an outsider as seemingly nobody will speak to you. However nobody 'handbagged' Jojo as she took a shot of this Arriva Wright Streetlite as it arrived in Walsall
Posted by christopher at 06:52 No comments: 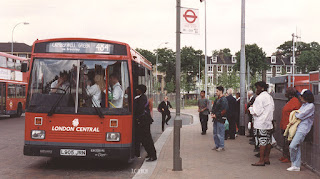 These East-Lancs bodies on the Dennis Dart were mostly found on Drawline Group buses but notable exceptions were these for London Central like this one here at Lewisham loading for Camberwell Green..
Posted by christopher at 01:54 2 comments: 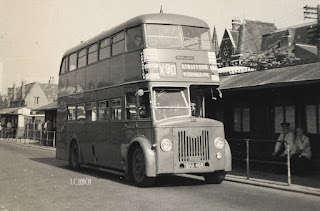 Coventry didn't have a Midland Red garage but it was well served by the company particularly from routes worked by Leamington. Stalwarts for many years were the town's fourteen of the 100 LD8's which tended to look smart and a lot more loved compared to their Birmingham and Black Country sisters which had hard lives.
Posted by christopher at 07:06 2 comments:

A newcomer to the bus scene in Stafford stands out for the timebeing at least as it wears an unusual and  somewhat jazzy colour-scheme which in this clean condition looked nicer than one might expect. But this rather mundane Plaxton Pointer bodied Dennis Dart surprised me as it started life in Edinburgh with Lothian one of Britains most highly regarded operators so perhaps it's in better condition than would expect for a bus dating from 2002.
Posted by christopher at 14:10 No comments: 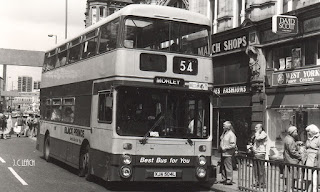 Most of the Greater Manchester Daimler Fleetlines and Leyland Atlanteans had their standard Northern Counties body built in Wigan, but one of the latter carries a Park Royal body and by this time it had passed to Black Prince and was seen in Leeds.
Posted by christopher at 02:02 No comments: 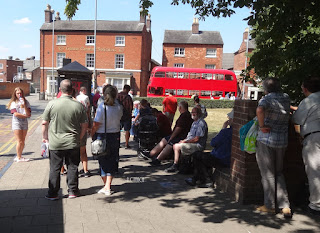 Today Arriva had a garage open day at Tamworth to celebrate it's Ninety Year Birthday. Also there were some interesting rides which didn't exactly take one as the crow flies which wasn't a bad thing but it was certainly hot on the top deck of a D9 like 5399 BHA399C
Posted by christopher at 15:58 No comments: