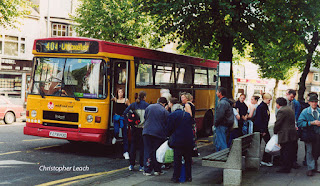 By the time this view was taken towards the end of the Nineties much travelled Midland Red 1778 F278 HOD was part of Arriva as was the 404 to Stafford from Uttoxeter which was once a Whieldon's Green Bus service before being taken over by Stevenson's. For a time allocated to Cannock this bus had been painted in BMMO revived all-red livery but like the others looked much nicer a more cheerful red and cream.

Posted by christopher at 15:13 No comments: 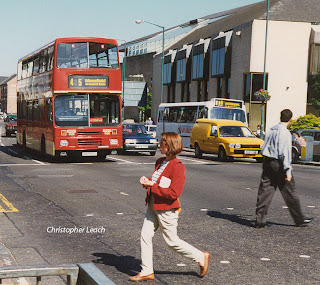 With an open day at Langley Mill Trent is celebrating 100 years so I thought I would at least find something appropriate, it is also an excuse to post this less than perfect picture of Alexander bodied Volvo G617DTV. After Privatisation and with little spare cash buying their first batch of these buses seemed a huge gamble. But I read they were so reliable and liked by one and all they did much to put the revitalised Trent Barton firmly on the map. Sadly most of the former Municipal operators and operators that made up the NBC have vanished so it's good to see a once familiar name still thriving as is now only partly owned Nottingham City Transport if that's what it is still called.

Bere Regis on the Embankment 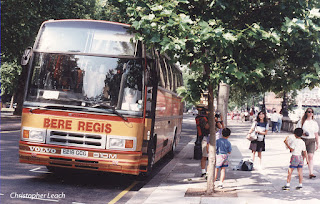 In the Nineties Bere Regis coaches became quite a familiar sight in London and on a lovely day in August 1991 Volvo Plaxton E218 GCG shared The Embankment with other visitors including a young family of Japanese tourists
Posted by christopher at 00:26 No comments:

That's right a Wright Handybus on a Leyland Swift 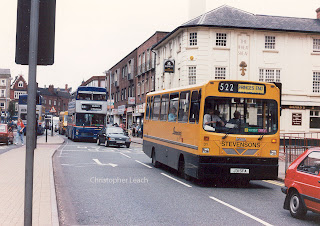 Despite it's functional square appearance I rather liked the Wright Handybus, maybe it reminded me slightly of those early underfloor saloons of the Fifties like the RF and BMMO S14. Most were Dennis Darts but because of their unpopularity canny Stevenson's snapped up a number of less sophisticated Leyland Swifts based on the Leyland Terrier truck chassis yet liked them enough to buy some new some fairly unique new ones by Wright like J31 SFA seen in Wolverhampton in about 1988.
Posted by christopher at 02:01 1 comment: 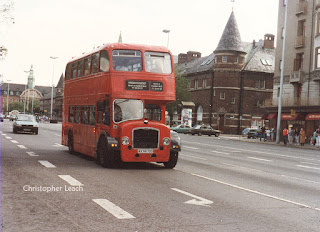 A funny bus indeed, but I'm sure the double meaning was wasted on most of passengers in Copenhagen who must have been taken in thinking this might be a proper London bus just because it was a red half-cab double-decker. But maybe that was not such a bad thing as it ensured the survival at least for the timebeing of a few more more comparitively neglected provincial bus types like this bristol Lowdekka giving them a half chance of ongoing preservation. Taken in 1982 I wonder if it still survives.
Posted by christopher at 01:31 No comments:

Try before you buy Tiger 245 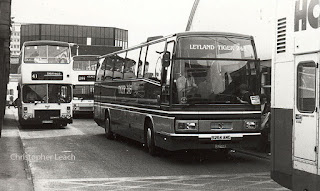 On demonstration at Sheffield Pond Street Bus Station was Plaxton bodied Leyland Tiger 245 B264 AMG. Sometimes decent sized orders but canny operators took full advantage of these free and quite new buses with little intention to make a purchase, although no doubt priority was given to regular of potentially big customers.
Posted by christopher at 02:33 No comments: 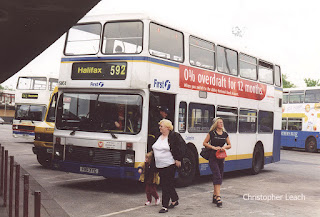 Once Todmondon's rather elegant bottle-green lowbridge all-Leyland PD2's used to be a familiar sight at Burnley. Firstly they were merged with Halifax before becoming part of the West Yorkshire PTE. Passing on to the First Group I suppose not all was totally lost as in their early years Calderdale had the most attractive of the local First's liveries as witnessed by 5161 F161 FYG a Northern Counties bodied Leyland Olympian on the 592.
Posted by christopher at 08:25 No comments: 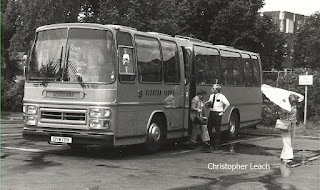 Most of the early post-war heavyweight coaches of the early Fifties tended to have centre entrances, but without an attendant to man the door and being unsuitable for service work the practicality of a front entrance became much more desirable. After the best known user Wallace Arnold dropped them too in 1966 only Glenton Tours deemed that extra bit of luxury worth including for it's extended tour program. Numerically the last example was a similar Volvo B58-56 Plaxton C38C coach to this HYR 177W. Also of interest, in the early Eighties a number of mid-life Volvos were rebodied with conventional front-entrances so despite comparatively low mileages maybe their inferior second-hand value made it a most prudent 'win win' decision..DYW 17!V was pictures in the Staffordshire city of Lichfield whose magnificent Cathedral makes it a must visit on Scottish and The Lakes tours from London.
Posted by christopher at 07:59 2 comments: 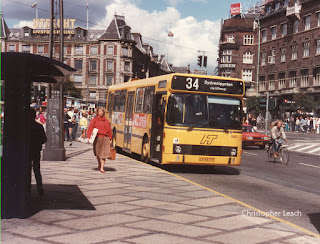 Usually in Denmark Aabenraa supplied most of the bodywork on Volvos whilst on the other hand DAB bodies were on the Leyland. But later they were also available on the open market and the Copenhagen PTE called HT had them on both chassis. Four year old Volvo 1682 was seen in 1988.
Posted by christopher at 03:07 2 comments: 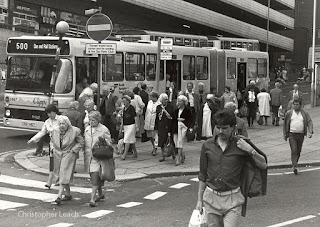 Though I say it myself I was always a bit of a DAB hand at taking buses and girls photos, albeit more by accident than design. lol Sometimes it's worth just pointing the camera into the crowd but even though it produced an interesting shot of South Yorkshire DAB-Leyland articulated bus 2007 C107 HDT there was nothing for Jowit fans on that arrival. As there were niches for it Leyland tried to sell these Danish buses in Britain but even though they were a high quality product no doubt the high cost of these Scandinavian imports was prohibitive.

Posted by christopher at 01:33 No comments:

Lost in a Uttoxeter Scrapyard 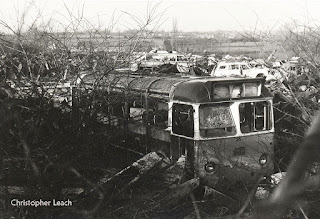 Probably early in 1980 on a beautiful crisp sunny Sunday morning lack of leaf cover afforded an unrestricted view of this former Yorkshire Woollen Park Royal bodied AEC Reliance DHD 192 languishing at the local scrapyard in Uttoxeter. Built in 1959 it served with Stevenson's as their No.26. Many interesting bus ended up in here including the Elkes Biscuits former London RLH's.
Posted by christopher at 01:37 No comments:

RE 853: A busy Victoria Coach Station 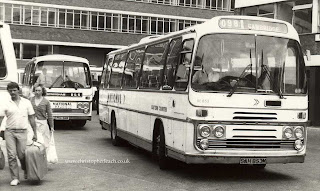 Two Plaxton bodied coaches RE 853 SAH 853M a Bristol and a Midland Red 12m Leyland Leopard 314 PHA 314M in standard National Express colours make their way carefully through a busy Victoria Coach Station in the Eighties.
Posted by christopher at 01:49 No comments: