Midland-Red D10's were two-a-penny in Stafford 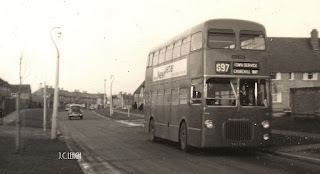 From a bus perspective Stafford's claim to fame is it was home to Midland Red's two revolutionary underfloor engined D10 buses. Experiments had been tried out as long ago as the 1930's but nobody built anything reliable for the British market till Volvo came along with it's Citybus in the 80's. So it was sad that these buses never went into production as they never gave any trouble here once the garage got on top of all the jobs that needed doing on them and made little unofficial modifications like a hatch in the floor to make jobs easier, not that it pleased Carlyle which and de-modified them again but Stafford changed them back again!  Before they arrived here they had been hard worked on one of the companies toughest routes the 245-6 called 'The Track' as it followed the old tramway between Wednesbury and Stourbridge. It also went through Dudley and the buses were kept at the old tram depot site at Hartshill near Merry Hill.  They regularly had a maintanance problem in the Black Country and with these buses being different they were deemed a lot more trouble and  were no doubt neglected even more than normal. When it was finally decided to move them away the company found it hard to find a garage that would take them and they spent a short three month spell at Leicester in 1964 before finding a loving home at Pilgrim Place for the next eight years. They regulary did the 836 to Cannock and one set out each morning at 06.15 sometimes with me on board for Lichfield on the 825. Another regular haunt was the S84 and S97 to Burton Manor Estate as seen here where 4943 the first of the two was waiting next to The Nesbit. It makes you wonder how many crews weren't tempted to go for a swift half as it wasn't quite so wrong in those days lol.
Posted by christopher at 02:52

Christopher I have always thought what might have been when you compare the D10s with the Volvo Alisas introduced by the WMPTE at Midland Reds Birchley Crossing garage outside Oldbury in 1976 and became the mainstay of the 86 87 415 & 417 amongst others. The 87 continues today the 417 is now the 4H & the 415 the 4M albiet to slightly different routes.

Nice picture of a rare bus in a working environment. Dare say that estate road is full of parked cars these days.

Thanks, yes I liked the Ailsa but of course it wasn't underfloor engined and Philip you will be pleased to read these roads are not too thronged with parked cars as it's not too overbuilt but alas the roads are a bit narrow.

he content provided in your blog is simple and easy to understand. Thank you for writing this topic.