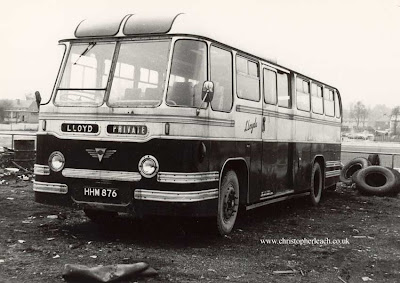 This coach is a real gem indeed so much so I know little about it. Built in the early Fifties it might have well been a Regal rather than a Reliance and was first registered in the London area. My guess though when comparing details with other contemporary vehicles is that it might have bore bodywork by Mann Egerton but that is a pure guess as they were better known for bodying fine cars like the Bentley and Rolls Royce and few buses remain. This AEC was seen at the Nuneaton Avenue Road premises of Lloyd in the late Sixties whose once well-known interesting fleet of blue and cream buses and coaches numbered in the region of Eighty.
Posted by christopher at 08:01

Thanks Tom, believe it or not there are people who know all about these buses without even refering to the lists. I'll take a look at those too.