A VBK 50 Volvo at Lyngby 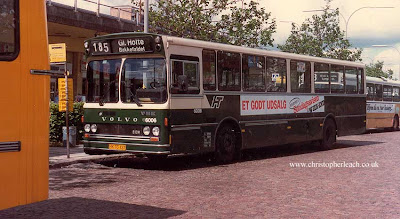 One of the nice things about exploring Copenhagen's larger suburbs like Lyngby was not only seeing the number of former Independents buses still wearing their original colours but in the process the Danish capital's operator HT had acquired some interesting buses too. These included a pair of Volvo B10M-60 buses with VBK 50 bodies dating from 1980. This pair Nos.6006-7 became part of HT in 1982 when Hjortekaer Trafik was taken over but when I was there again at the end of the Eighties little had changed and they were still wearing that smart dark green and working their original routes like the 185 to Holte and Bakkefaldet.
Posted by christopher at 03:14

What a smart livery!

Andrew, it is a pleasant livery, but back in the Sixties colours like these were quite common. Two good UK examples are King Alfred and Caerphilly.