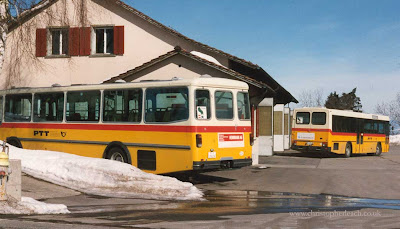 Although there were always plenty of post buses waiting there at departure time in Wadenswil outside the station, the garage itself with an allocation of seven was some distance away high up in the hills above the town and Lake Zurich at Hutten on the route to Menzingen. Even when I was first there in the early Nineties it had already been for some time a typical in this part slightly less interesting Mercedes stable. However as happens elsewhere on the postal network usually there was an older often non-standard bus too that was officially the garage spare. At the end of it's life with the PTT 1982 P25829 moved from it's home at Winkel (Bulach) to perform that role here. Had they not told me where it had not moved to I might have missed this Suarer RH too. In the end there were only ten I never saw and when I first started seeking them out in 1990 already five had been sold so I did well to see so many. By this time in the mid Nineties I only needed a few so at this closing stage a photo became quite a common accompaniment too and especially when it was a nice crisp bright snowy winter view showing also a more typical Mercedes but the low-key functional nature of these post bus garages which many would never think of making a record of.
Posted by christopher at 02:40