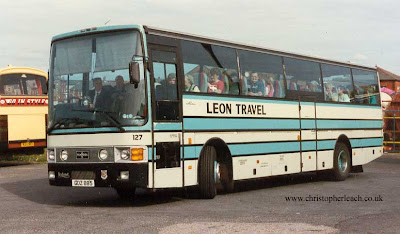 I think it was Richard who left me a message on my guestbook requesting pictures of more Lancashire Independent Coaches visiting Blackpool and especially views taken at the old Coleseum Bus Station. I only spotted your note yesterday but in the meantime I'm sure you don't dislike those people from across the Pennines enough to scorn one of their best known private operators, a survivor at least when I took this Nineties photo of the days when the Doncaster area of South Yourkshire was awash with them. As a bus enthusiast my favourite make has always been Leyland as I love those 0.680 engine sounds, the manufacturer's badges and even the glint of polished Leyland wheel-trims. A trip to Blackpool was an opportunity to record all these things and amazingly despite having been through the mill when it's good name became synonymous with the British-Leyland regime, although it could no longer produce world beating buses it's old once familar world famous image was rekindled ready for the Final Ball followed by a pronounced loss of face once it lost the engineering back up of Leyland Trucks whose plant had supplied the engines. One of Leyland's later products was it's replacement for the legendry Leopard the Tiger, and like it's predecesor usually seen with Plaxton on Duple Coachwork, but a few were bodied by Van Hool too, especially those that went to Shearings alonside it's similar looking Volvos. Leon's of Fillongley's No.127 GDZ 885 could have quite easily have once have been one of those but it wasn't as it started life just outside London with Travellers of Hounslow as B327 AHM.
Posted by christopher at 08:44

Thanks Chris lots of good happy memorys of this era at blackpool,will look forward to more. thanks Richard