Love is in the air, it must be Saint Valentines Day 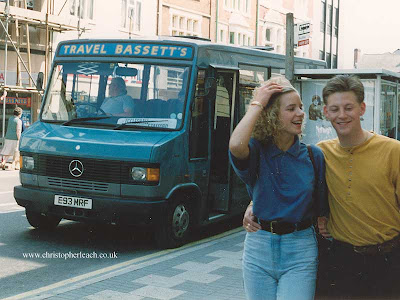 They might get in the way of your bus, but had it not been for these two young lovers adding a bit of colour to this Stafford scene I might not have photographed Reg Bassett's rather mudane and unexciting Mercedes minibus covering for the more usual former W Robinson & Son Leyland Leopard on the very roundabout country route it worked under tender for the County Council over what was once at least a couple of PMT single-deck OPO routes, before the local seven bus garage closed with MAP, the National Bus Companies Doctor Beeching inspired cuts. This semi-circular lifeline headed slightly NE to Hopton then on to Stone in the North eventually finding itself in Eccleshall seven miles to the west of Stafford.
Posted by christopher at 11:48