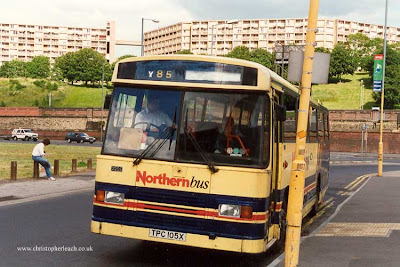 In each of our major cities it seemed Deregulation spawned at least one memorable Independent operator whose interesting fleet and strong presence will not be forgotten by the enthusiasts. Sheffied had it's fair share of new arrivals but top of the pile must be the wonderful Northern Bus who somehow managed to make everything look good in it's bold, and forgive me with what I might christen a midnight-blue, creamy-yellow and red livery. Bristol ECW buses that could almost have come from Western National carried that operators sort of traditional pressed metal fleet numbers plates like this one 2205 which suggested a member of a very large fleet indeed. But even though Northern Bus was not tiny it's fleet that might have contained betwen 50-100 buses hardly merited such huge digits. Yes it had interesting vehicles too as these rebodied former ECW Green Line Leyland Tiger Coaches were mostly to be found with Midland Red North but somehow this example from the same batch escaped to South Yorkshire and looked quite different to it's sister that were also fitted with new East-Lancs bodies and mostly operating in Stafford.
Posted by christopher at 15:26