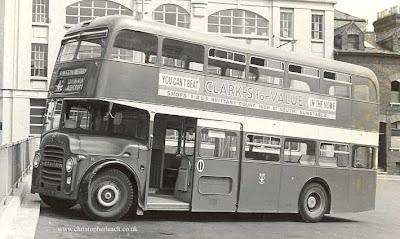 Many Municipal operators surrounding Britain's major cities were lost when they became integrated into the Area PTE's but in 1970 two more sold out to the NBC, Exeter to Western National's smaller Devon General unit and Luton to United Counties. Luton ran seventy-five buses from a modern garage in Park Street and it's double-deckers were all of the unpopular lowbridge or later lowheight variety. Most were Leylands but there were eight Dennis Lolines too and sixteen Albion Lowlanders like attractive 1962 East-Lancs bodied No.174. Actually outside Scotland these buses were marketed as Leyland's but in this shot one can still see there was an Albion Badge at the top of the radiator grill to show it's true Scottish pedigree. Sadly some of my photographic prints have yellowed with age like this print of 1968 but I'm sure many will still want to see some fine old buses of Yesterday.
Posted by christopher at 11:16