Lisbon: I don't want any Orange and I'm getting in a 'right old mess' 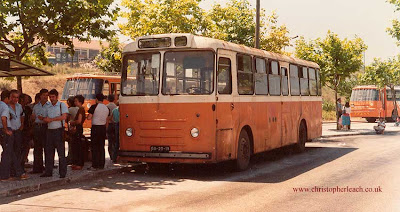 I'm not where I want to be and this old bus is going nowhere either.
Being interested in transport one can waste a lot of time on hoilday trying to find certain unlikely locations and especially so when annoyingly language problems steer you right off track. In Lisbon crossing high above on the spectacular Tagus Bridge it was not difficult to notice the collection of gently rotting faded mostly green AEC buses awaiting their final fate at the rear of of Carris Works at Santo Amaro. So the next day with map in hand I pointed where I wanted to go but instead of arriving down by the estuary I ended up at what I believe to be called Rodoviaria the main RN terminus for it's long distance services. Indeed I had put my finger on the right place on the map saying "I want to go here?" but unfortunately directly above it was an arrow to the Tagus Bridge and the words 'THE ALGARVE'. I mean how stupid can people be, after all how many tourists actually want go to the The Algarve to enjoy the sun when normal people like myself getting hot and bothered in the process prefer to seek out those wonderful old AEC's hidden away behind the grim industrial buildings. No doubt this old 'canteen-bus' must mean something to many of you, but for myself I can't tell you much about it apart from it being orange and probably dating from the early-Sixties. I did eventually get there the next day, but sadly it was Saturday and I couldn't go inside the works. However I didn't go away empty-handed as I was able to take a few worthwhile photos of the old buses over the wall at the back.
Posted by christopher at 07:41

Wow, Praça de Espanha, the main bus station for many lines to the "Margem do Sul", such as Costa da Caparica, Setubal and further on the the Alentejo. Mostly lines that belonged to areas 7 and 8 of the Rodoviária Nacional services. This bus, I think it is a GUY and not an AEC, must have been the predecessor to the canteen bus I know from the early 1990s, which was an AEC. This type of AEC was used a lot for municipal services in Setubal and Evora.

Sorry, that last municipal bus type should be a GUY of course.

Ah thanks, so that's what this place was called. Yes Guy buses were quite common in Portugal too and I have some pictures of one or two to come.