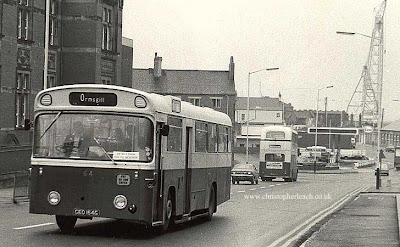 It is some years now since Barrow lost it's smart dark blue and cream Corporation Buses in favour of those Stagecoach stripes. Like most Municipal fleets single-deckers used to play only a small part in this double-decker based fleet. In 1965 there were only nine a situation that had reversed itself by 1985 when fewer passengers and almost universal one-person-operation had almost driven those bigger buses to extinction. Like many Corporations in North West Britain Barrow had traditionally been a Leyland fleet and although there were still ten Leopards like this Neepsend bodied example of 1969 and plenty of locally built Nationals, single and double-deck Daimler Fleetlines and single-deck Dennis Dominators had holed that dominance in this former stronghold. When I took this photo in about 1980 amongst the fifty buses there were still members from a batch of ten front-entrance Massey Bodied Leyland PD2's from 1961 in service, and that and the impressive crane in the shipyard in my opinion makes this slightly rough photograph still well worth posting.
Posted by christopher at 11:07