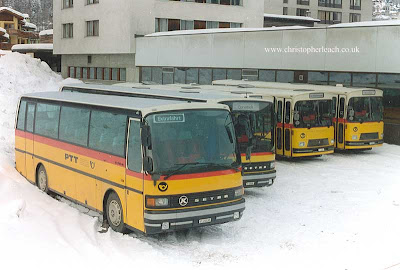 Here in the snow parked at the rear of the Post Auto Garage in St.Moritz in the early Nineties were five buses and no less than four of them were rarities in the main Swiss PTT Regie fleet. Nearest the camera was P24338 a short Setra 211 HM one of a pair allocated here whilst the third was at Sion. Partially hidden behind one of the operator's one-hundred-plus Setra 215 UL's were three very interesting buses being part of a batch of five FBW U-EU3A's P24800-4 that spent their entire working lives here, delivered in 1975-6. There was a final larger batch of FBW's delivered in 1977-8 but those arrived fitted with underpowered Mercedes engines, so as Saint Moritz was one of the traditional homes of the so-called shark's mouth Haifisch fronted Alpenwagens during my Swiss Schooldays in the Sixties maybe Switzerland's premier ski resort was a good home for these the last proper FBW powered buses.
Posted by christopher at 09:12