Sometimes one bus will make it a perfect day! 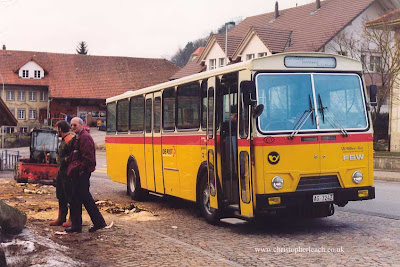 Exactly eight years ago when I was last in Switzerland Saurer and FBW buses were getting hard to find and I thought I would not find any more FBW post buses still in service. But late one afternoon I was on my way to Triengen when parked alongside my connecting Regie Mercedes O405 at Schoftland was this fine old Hess bodied FBW EU3A dating from 1975 and by then having travelled over 1.5 Million Kilometers was enjoying it's well earned semi-retirement as the reserve bus with PAH Robert Bach of Walde and I think the friendly driver was probably not far away from it either. So I immeadiately changed my schedule and jumped on board for an hour-long-ride through traditional Swiss villages and over rolling green hills leading to even more quaint traditional villages full of chalet-style farms and barns. Of course as always in Switzerland I had a tape-recorder with me and as the bus was empty on it's return journey I was able to take away more than just a couple of photos. It was even better than I had thought too as even though I had recordings of the aggresive growl made by the C50U mountain buses, this more urban bus was not so familiar and made a much more pedestrian transmission whine covering the usual throbbing sounds, and although a smaller bus the noises reminded me a lot of the Bern FBW rush-hour duty artics that I was also going to record again on this holiday before it was too late. So it was a special day and look even though it was starting to go dark I still managed to get my perfect Post Bus Picture.
Posted by christopher at 11:07