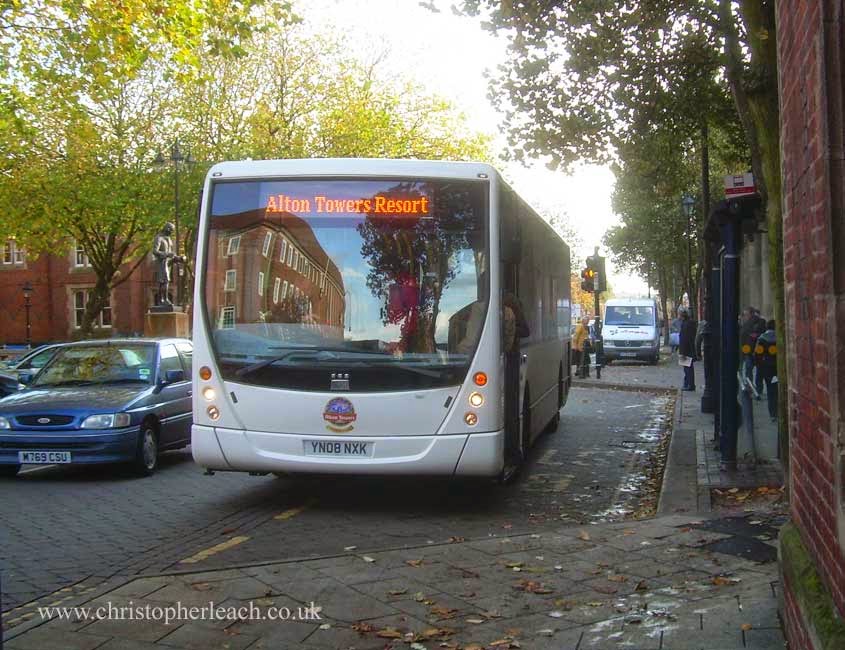 My last job used to take me to Stoke on Trent where I used to pick up businessmen to take them to a conference centre out in the sticks. The searching debate on board my rusty old Mercedes Minibus parked at the back didn't include what they had come up from the Prosperous South to discuss but only the train times home and how to cut corners to get the early one. So it's hardly surprising that Britain so often fails to deliver. The newest buses in the area were not not run by the major operator First, but as lowly staff buses for Alton Towers.
Posted by christopher at 15:00 No comments:

This Picture Says it All: LEU 263P 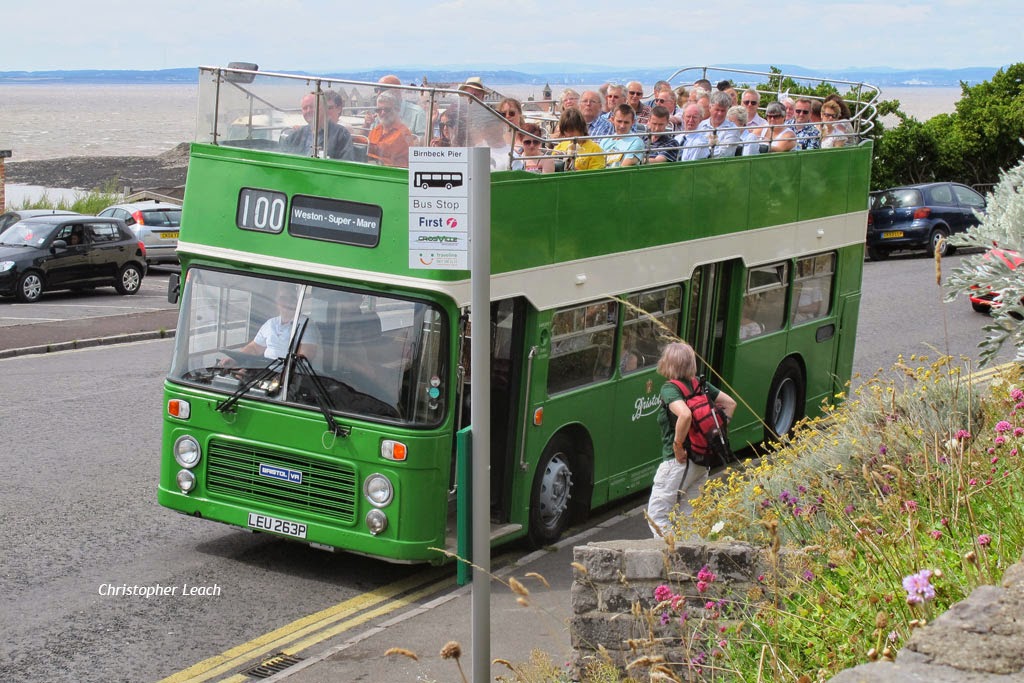 Sometimes Britain is a great place to be in and like having a glass of wine with your meal the experience goes down even better with a bit of  hands-on nostalgia thrown in. This view at Weston Super Mare recreates what it must have been like from the mid-Seventies when these open-top Bristol VR's were in service running along The Promenade.
Posted by christopher at 03:41 No comments: 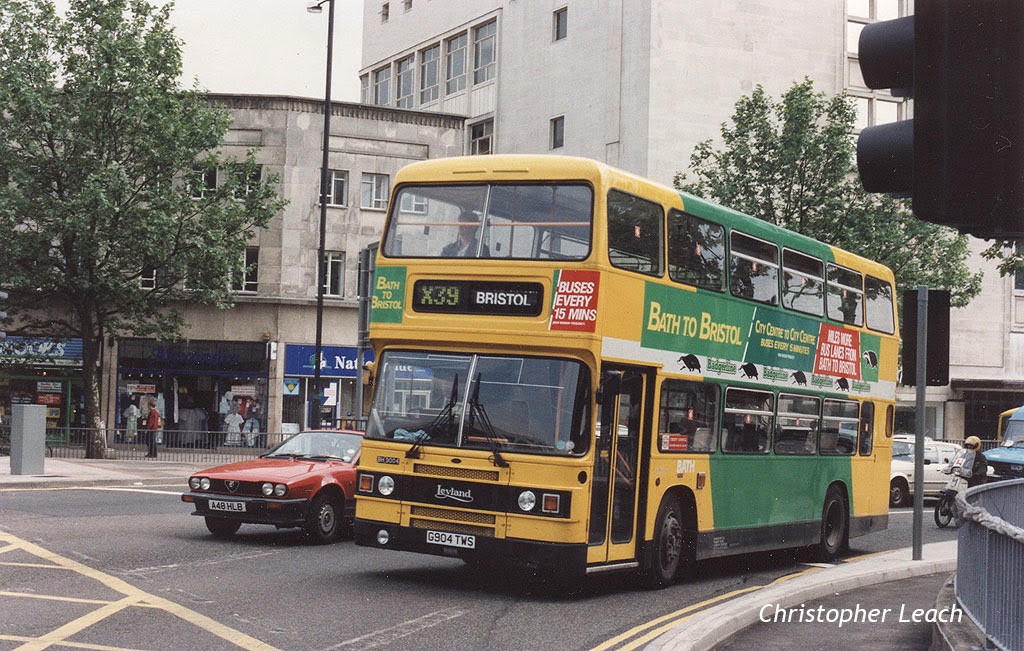 Badgerline used some of it's newest double-deckers on it's X39 Bristol to Bath service and the attractive livery seemed to suit this Bath based Leyland Olympian well. This was a late example and rather than the numerous ECW bodied buses this in fact might well have been bodied by Leyland itself. Indeed why have a quality bodybuilder with a long pedigree in Lowestoft when some 'Smart Alec' business planner can just close it down and find someone else to do it half as well. Indeed apart from Wright nobody today seems to build to that quality any more and even new buses seem ready to shake to bits.

Posted by christopher at 01:53 No comments: 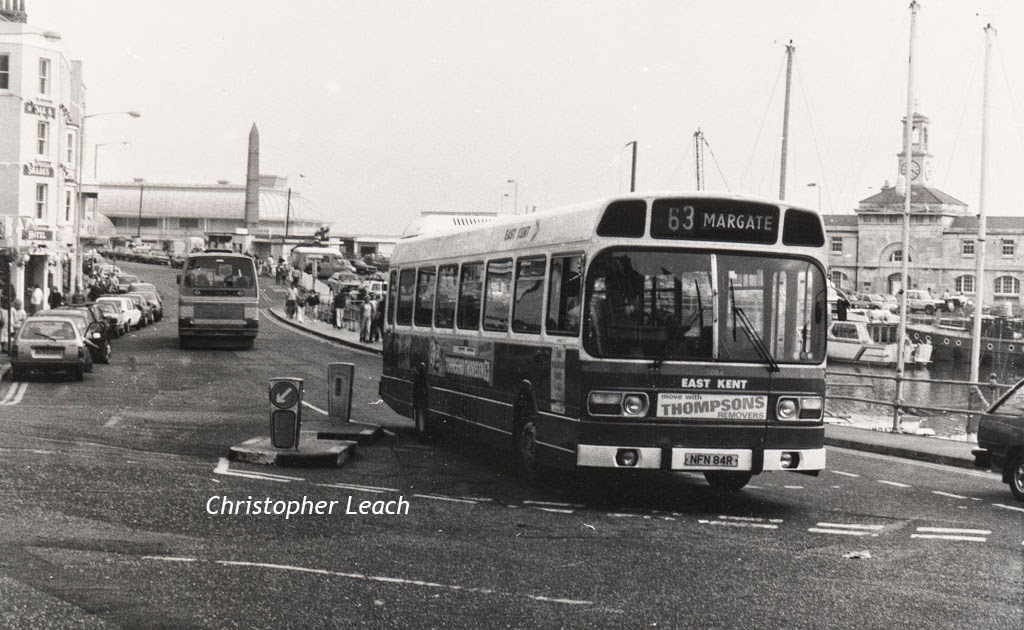 There is always something rather memorable about a day at the seaside even if the weather often disappoints. This was one of those wonderful moody autumn days, the kind of day when there is no breeze and the air is full of lingering scents and smells and one feels nostalgic for all the other times which seemed to have that magic. Sadly there was nothing to clear the air which despite the weak October sunshine made it rather dull and poor for photography. East Kent Leyland National in NBC dual-purpose livery was seen in Ramsgate.
Posted by christopher at 14:53 No comments: 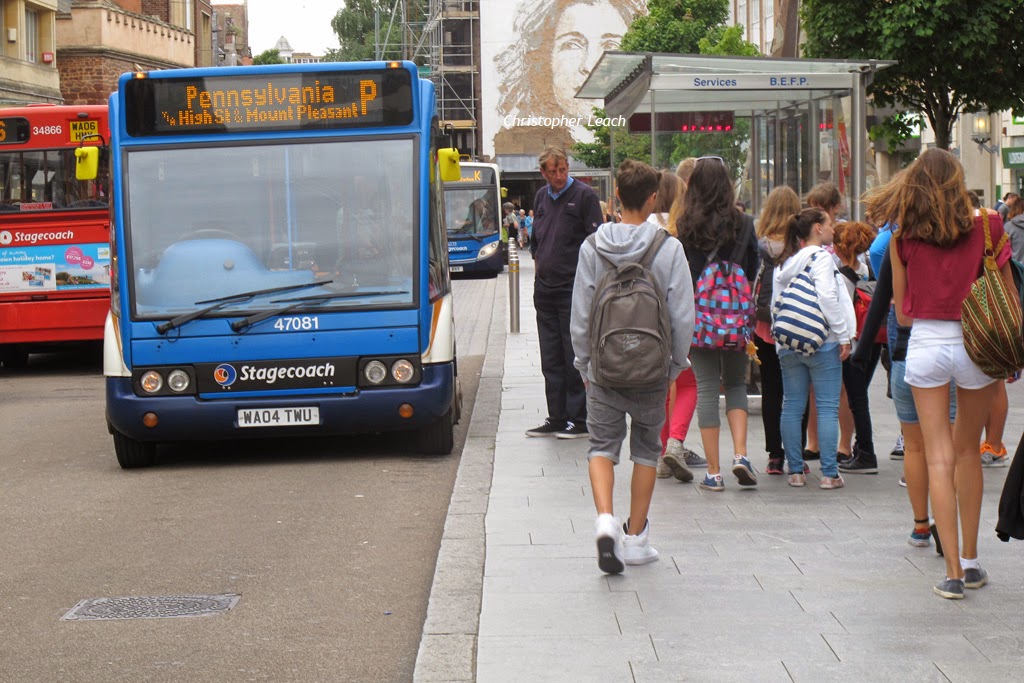 I'm not complaining but in Summer our more beautiful cities are invaded by tourists including many attractive students on exchange trips as happens at the Cathedral City of Exeter. Sadly those attractive green and cream Massey bodied Leyland PD2A's don't trundle down to places like Pennsylvania any more but one thing hasn't changed on this Stagecoach Optare Solo and that is they still use a letter instead of a number as happened in the Corporation days.
Posted by christopher at 01:40 No comments:

Strangely even though they now all carried those Stagecoach Stripes I still liked the former buses of it's Ribble area far more to say that of United Counties and other former BTC fleets. I'm sure some of it is because at my favourite places I try to savour the past, and besides there were still plenty of echoes of earlier times even though most of that was from the NBC years. Leylands were still about in abundance when I took this view in the mid-Nineties, but Alexander RL bodied Olympian B896 UAS at Preston was a long way south from it's former haunts as I have a 1986 allocation for it at  the Highland Omnibus depot at Nairn.

Posted by christopher at 12:54 No comments: 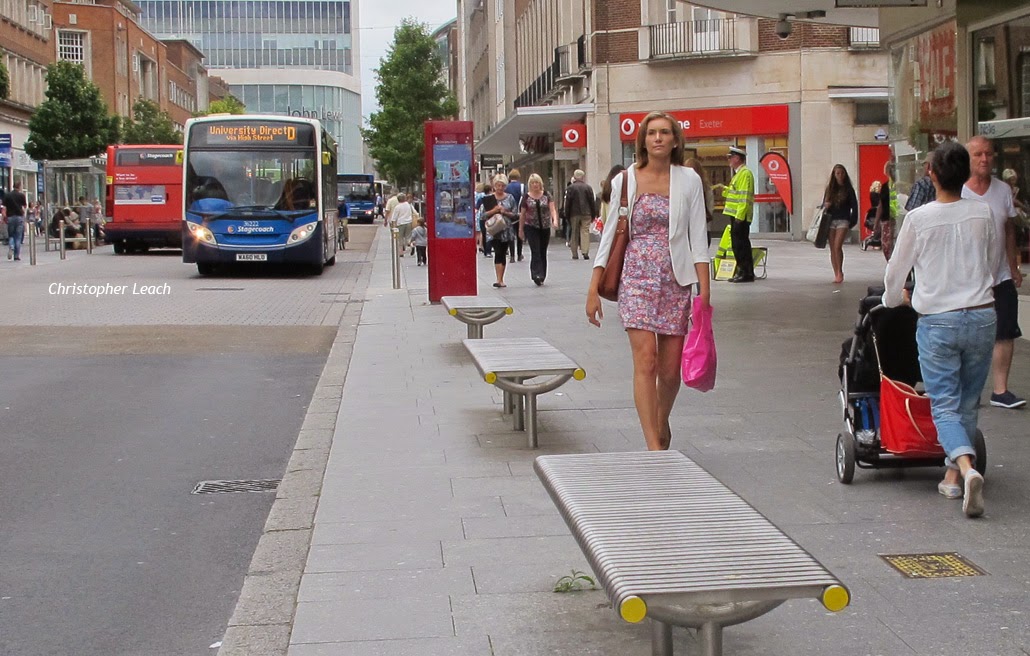 I don't have to ponder too long to think of the many advantages for being Jojo. Two of the less obvious is firstly women's loos are clean and spacious compared to a 'Gents' and I don't miss having to squeeze between two bolshy fellas or that annoying whistler in front of the fag butt and chewing gum depository urinal feeling rather uncomfortable and unable to empty my moments ago bursting bladder. Secondly part of my reason for enjoying life again is now I have this great little Cannon G12 Camera I'm getting back into photography. As street photography is what I like best being Jojo is far less intrusive than a man with a camera. Also most people don't even notice it and most of the others can't quite tell so no doubt the bored people who watch us in those CCTV rooms have no chance. Also the few who might realise I'm transgendered should leave me alone as they might feel it could be seen as sexual minority harassment. Now even though you might want to I'm not suggesting all the guys here on Flick should head off down to get kitted out at Ann Summers in a curly blond 'Dolly Parton Wig, pink PVC mini-skirt and fishnets as I do what  I have always done as Christopher and that is take pictures in a manner that is not too intrusive. Indeed it's just like being Jojo, one has to seem confident and purposeful otherwise it makes people and Big Brother annoyed and uneasy and they might just spoil your day!

Posted by christopher at 02:25 No comments:

Soldioring on in St Gallen 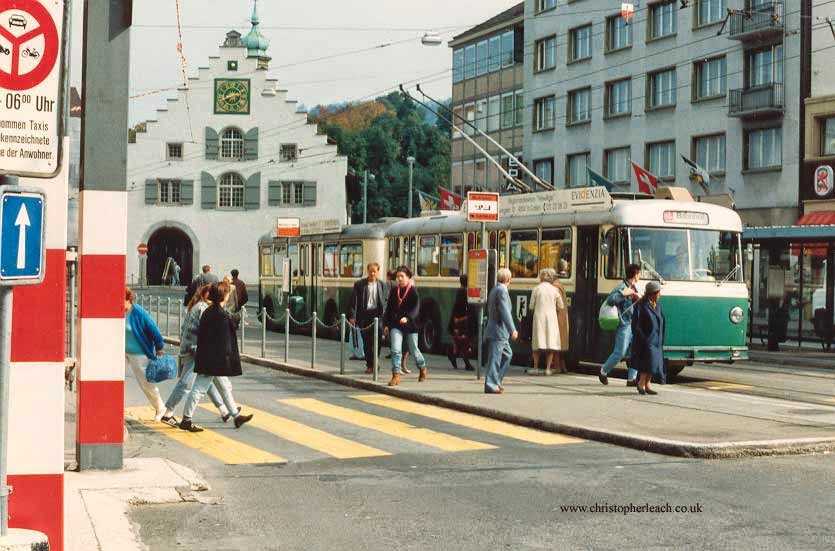 These old Sixties Swiss Saurer trolleybuses were still hard at work in St Gallen in the early Nineties. But despite their age like many buses from this country they went on to see service in poorer parts of the world.
Posted by christopher at 14:37 No comments: 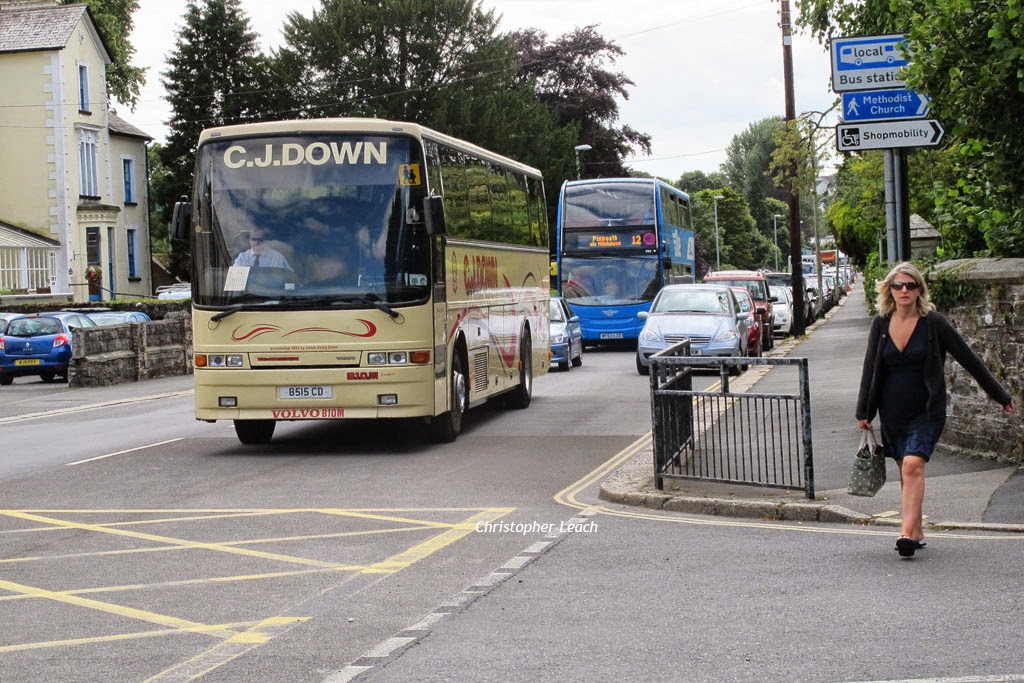 With so many once familiar names gone it's good to see a familiar name hard at work in Tavisock. Like many of these smaller firms they get about a bit as they have done work for National Express. With their liking for this personalised Brighton registration series it's a shame they didn't just buy some Southdown Harrington Cavalier bodied Leopards and get something for nothing.
Posted by christopher at 01:11 No comments: 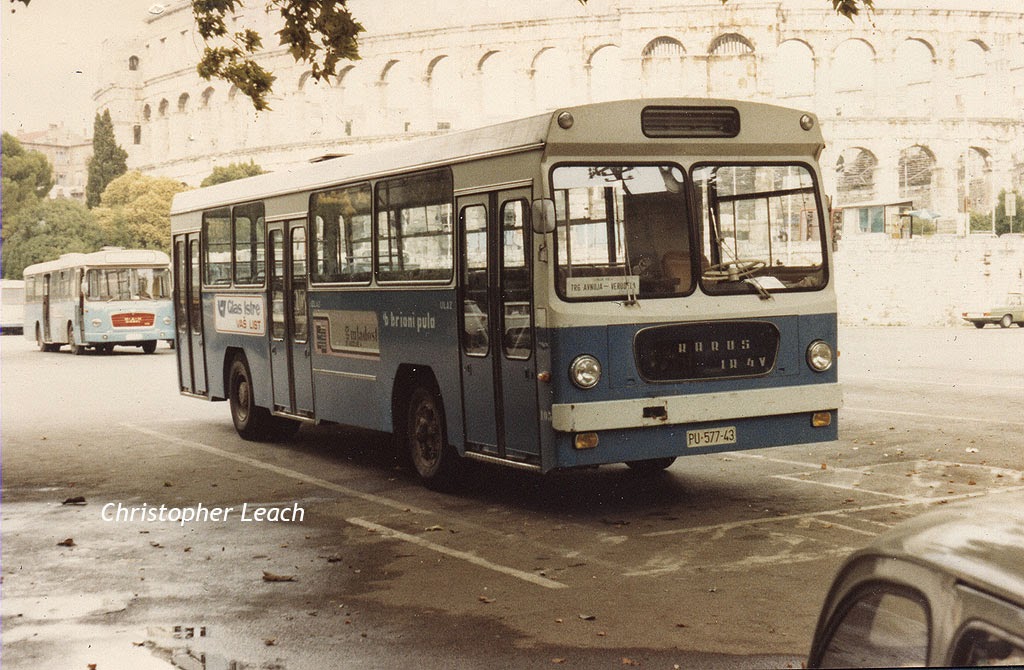 An unusual Ikarus in Pula 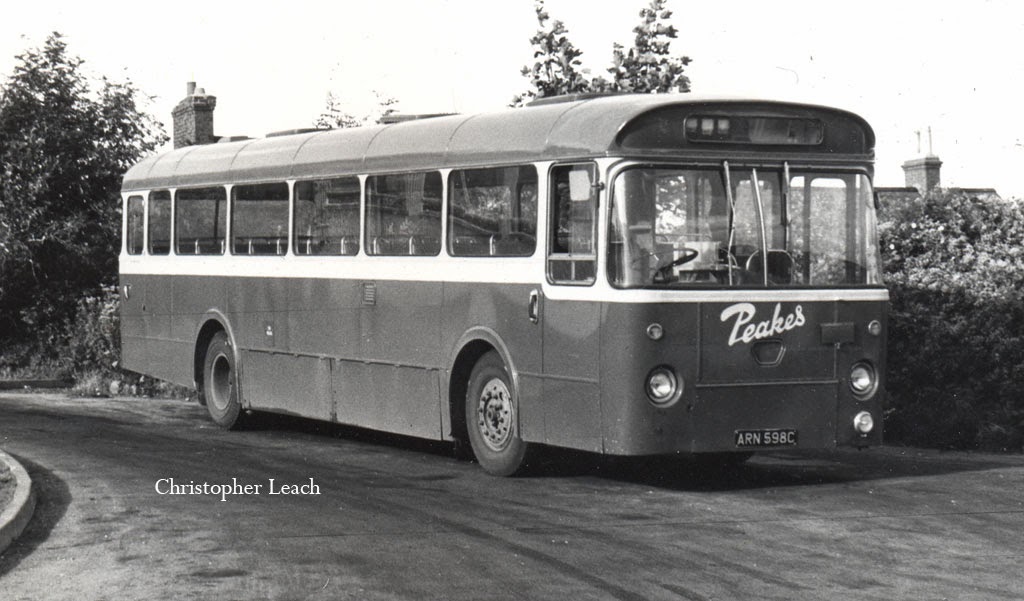 Ribble had a large number of these BET style 'same at both ends' Leopards so it's hardly surprising that secondhand examples later appeared with private operators all over Britain. Peake's ARN598C had Marshall bodywork and was seen at Pontypool in about 1980.

Posted by christopher at 14:11 No comments: 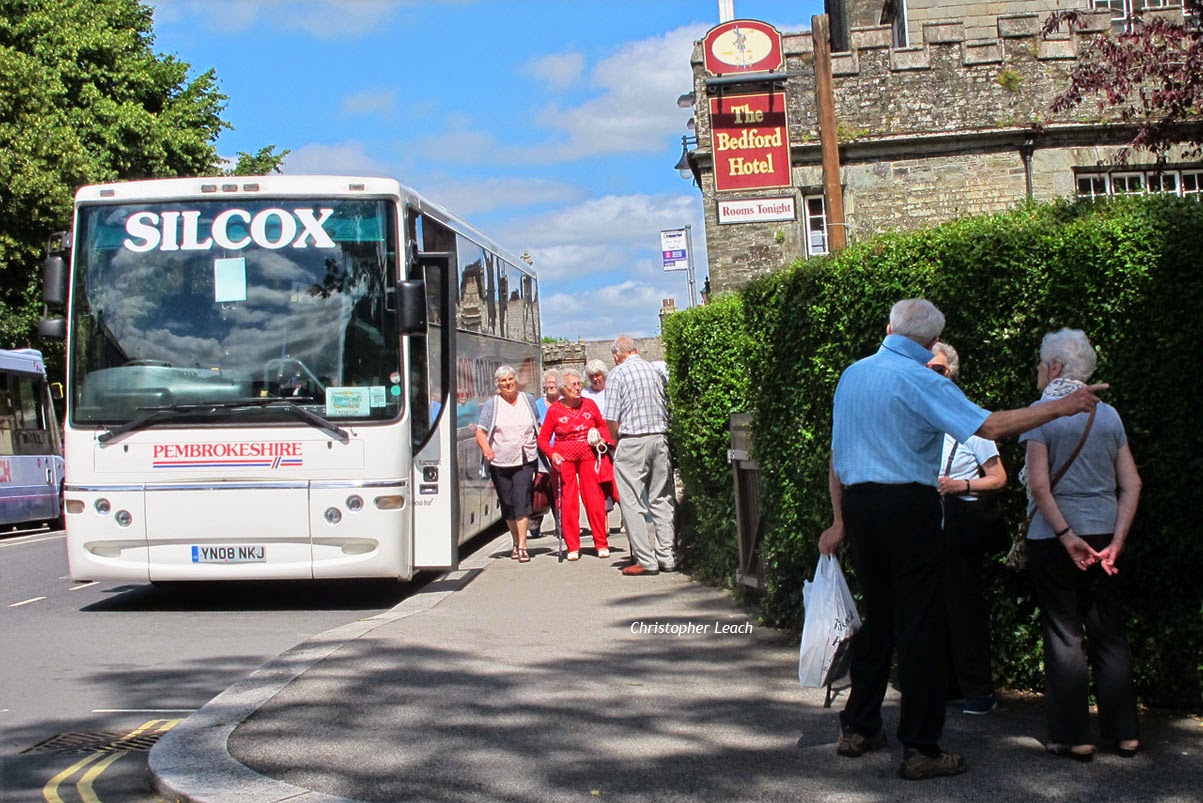 Although still only Silcox by name it was nice to see this well known Welsh operator still visiting Devon. The old folks were getting good service too being picked up outside the Bedford Hotel because other coaches made them trek down to the nearby coach park.
Posted by christopher at 15:39 1 comment: 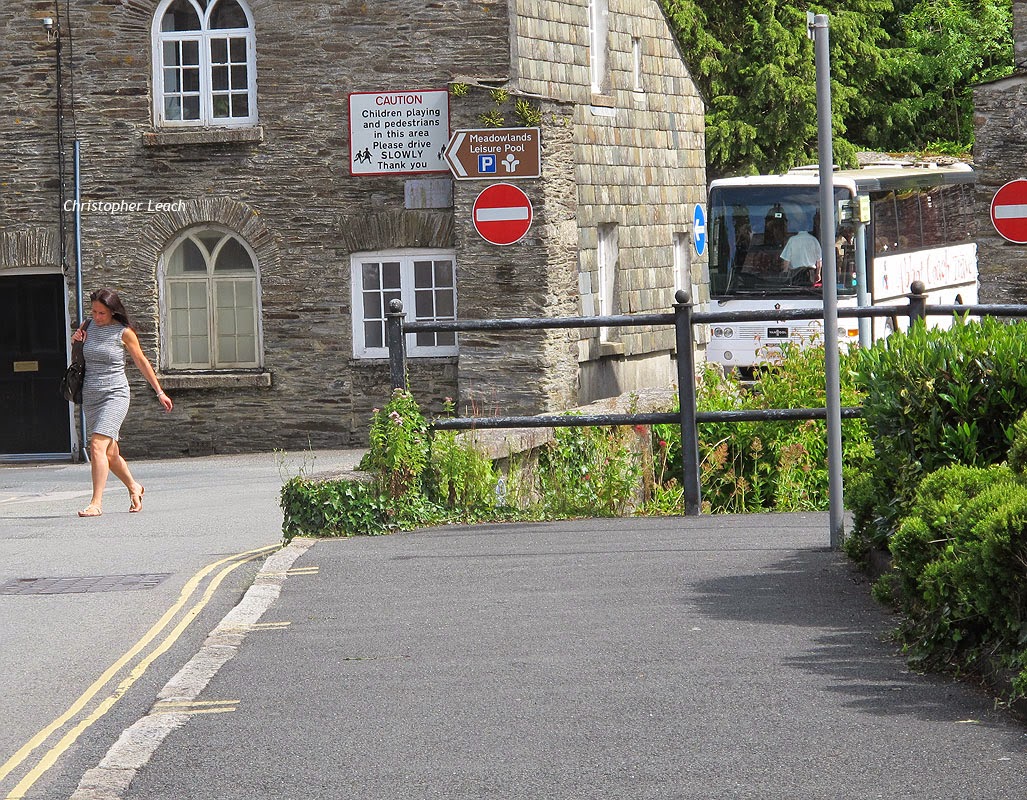 I had to wait to get a decent picture here as plain white E16 ACT sitting on the tar-mac just wasn't interesting enough to justify  a photo. But this little bit of untidiness nearby made it a more interesting view and I just had to wait for the right person to come along to turn it into a pleasing image. I did get a shot of it coming out heading home from Tavistock to Newton Abbot but I don't suppose you want to see it, but the coach sounded like a Scania.
Posted by christopher at 07:43 No comments: 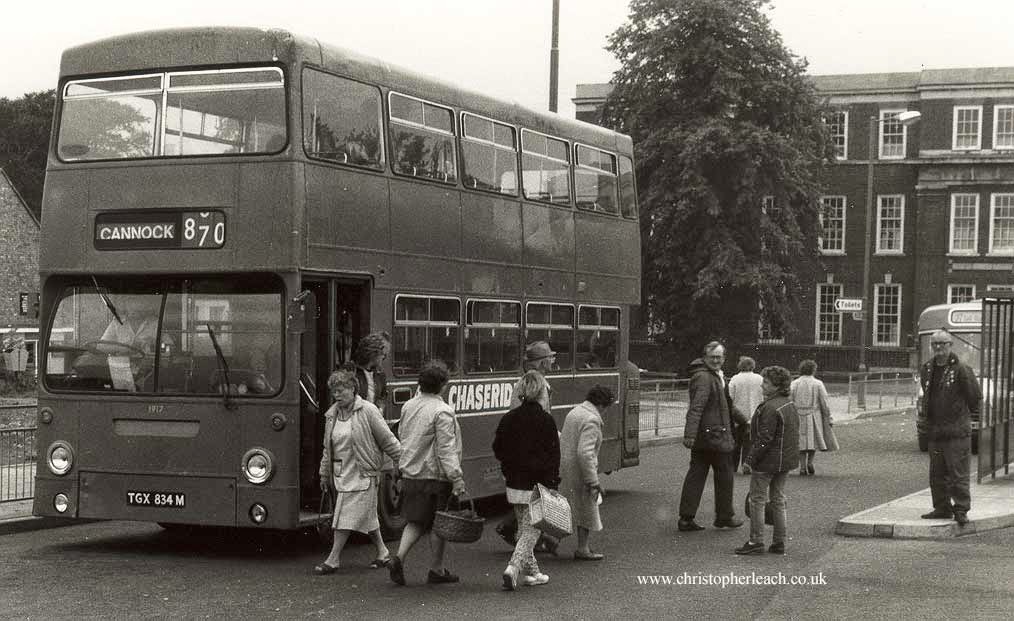 With it's overriding commitment to the Leyland National, NBC operators were starved on other types. This was the case at Midland Red North and a number of former London Buses Fleetlines arrived to buoy up the sparse double-decker fleet.
Posted by christopher at 03:59 No comments:

DAB's and a Volvo at Birkerod 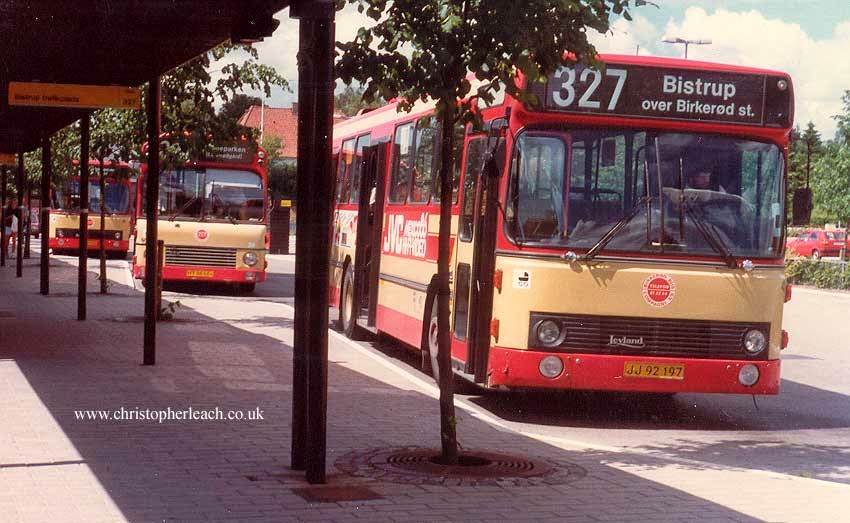 In Denmark a pair of fairly new DAB Leylands and an Aabeneraa bodied Volvo at Birkerod in 1982.
Posted by christopher at 08:06 No comments: 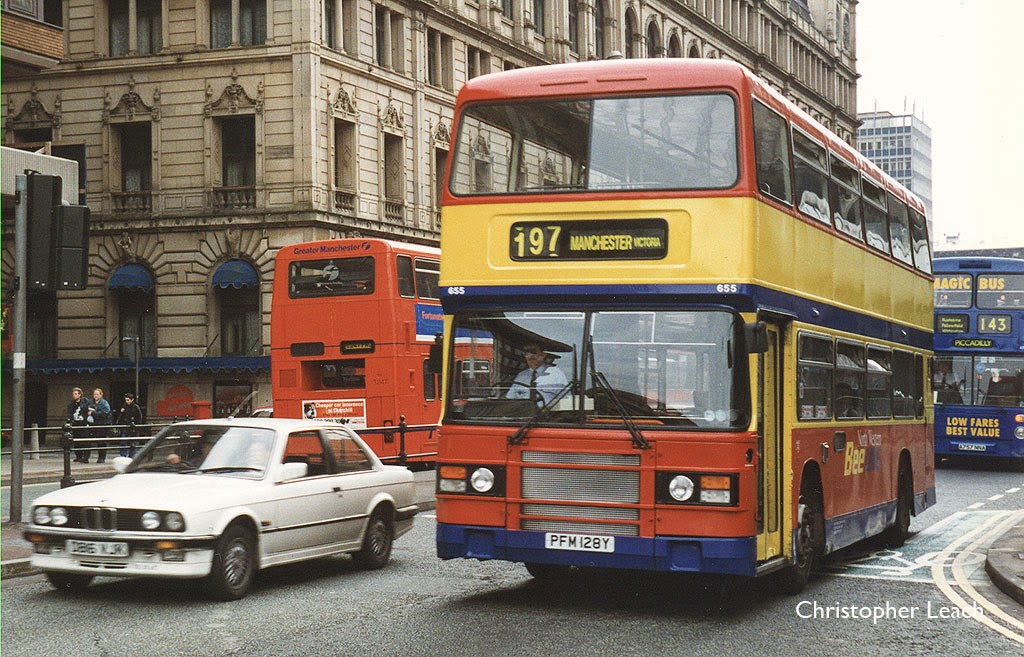 Some of the pre-Barbi First Group liveries were rather attractive and the cheerful nicely proportioned red blue and yellow of North Western Bee-Line was certainly a lot more colourful than the rather uninspiring 'tomato soup' and purple scheme used on the First-GM bus going the other way. Time is kind to many body designs and the ECW body on this former Crosville Olympian seems to look nicer with age as we start to miss them no doubt helped by memories of the sounds too.
Posted by christopher at 12:35 No comments: 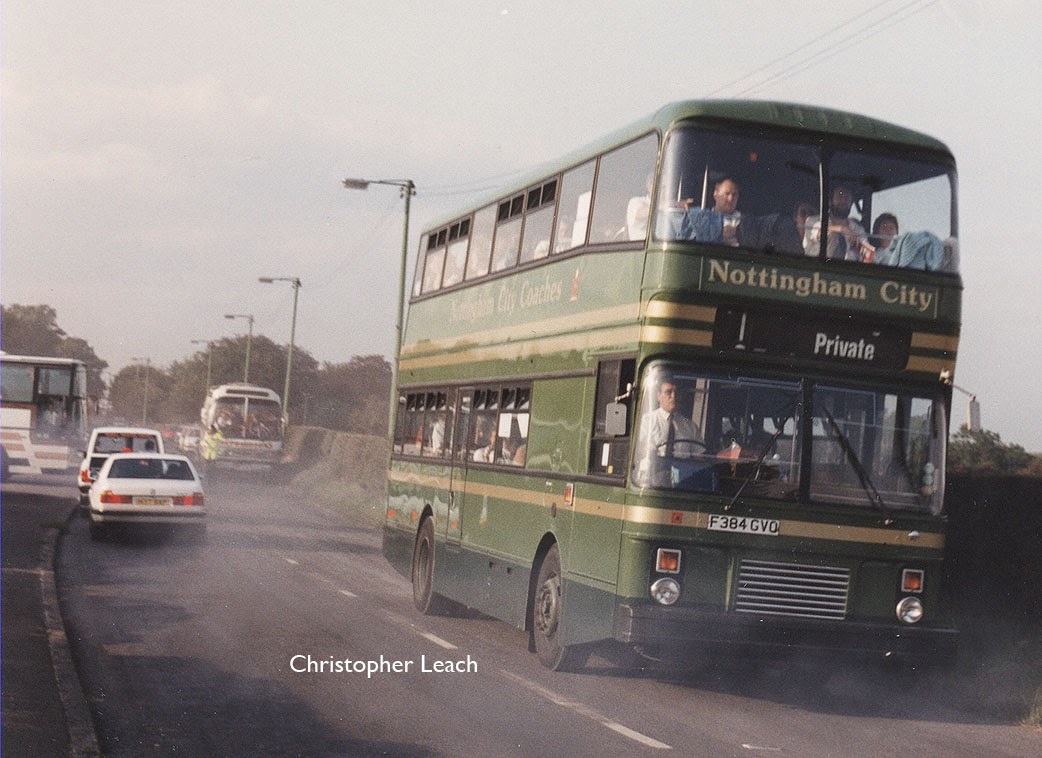 Leyland Bus wanted to extend it's model range with sophisticated imports from it's Danish subsidiary DAB but no doubt these were deemed too expensive. These included the underfloor Lion but apart from Nottingham City and Eastern Scottish there was little interest. Coach seated F384 GVO adds to the cloud of dust and exhaust smoke as it tries to make a quick getaway setting out from Doncaster Races back to Nottingham.
Posted by christopher at 14:13 No comments: 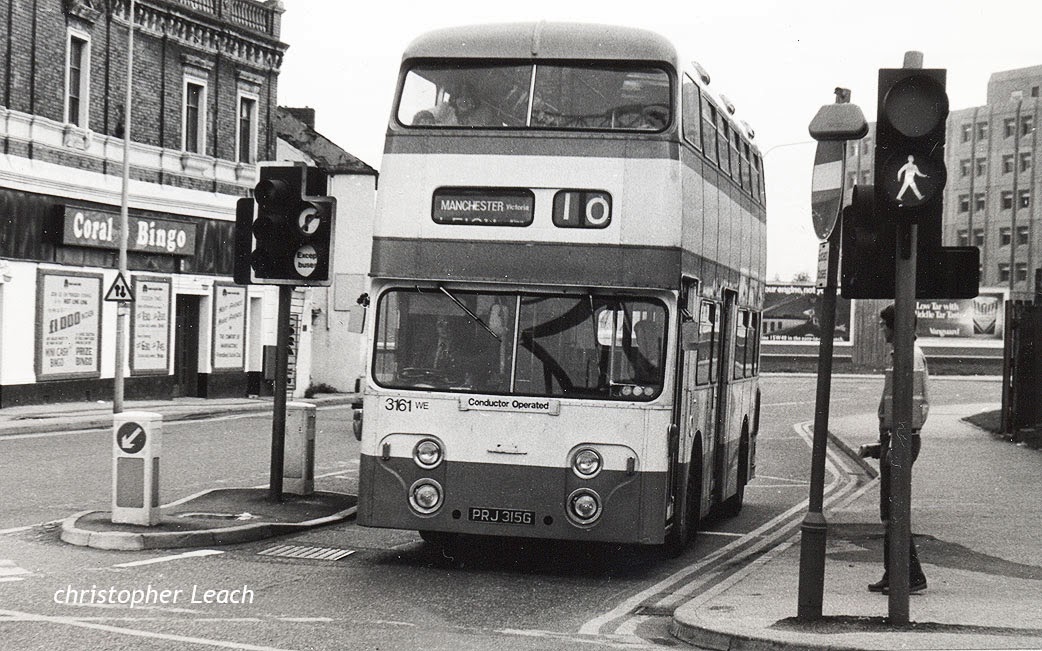 One of the many operators that used to visit Warrington was Salford who jointly worked the 10 Route with Lancashire United. Now in GMT colours a former Salford Park-Royal bodied Atlantean was still hard at work on it in the early Eighties.
Posted by christopher at 11:25 No comments: 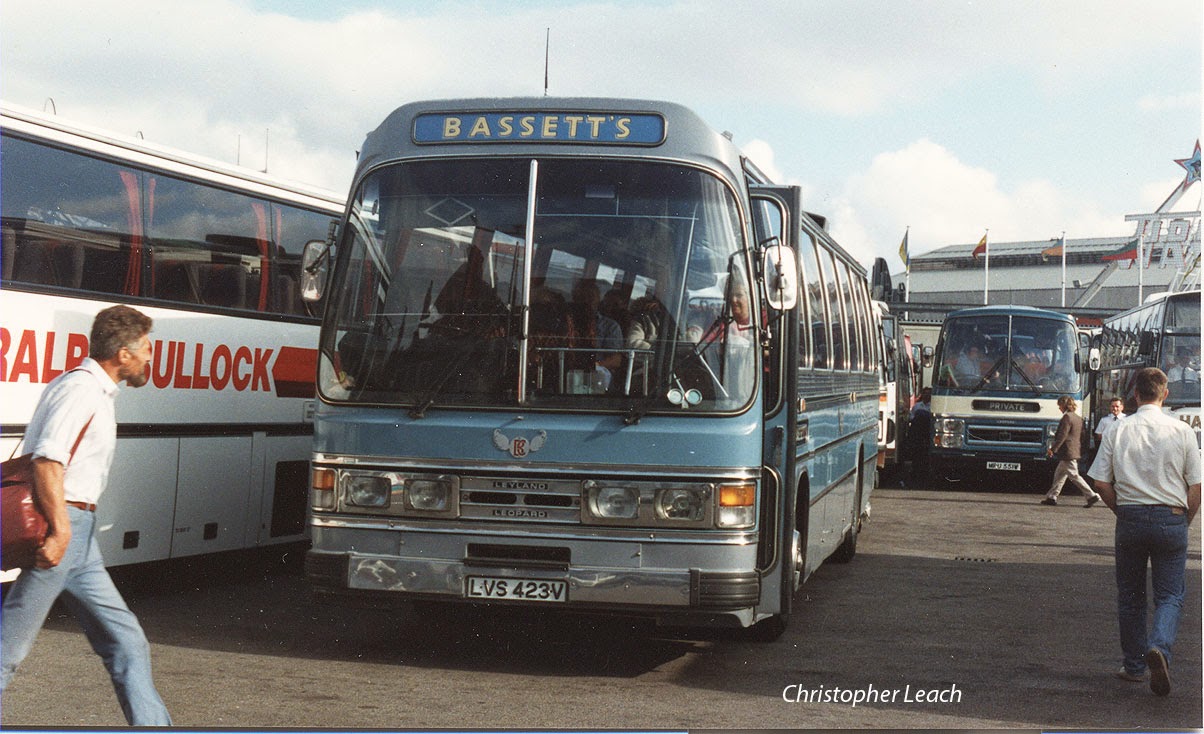 Blackpool seems to be a shadow of it's former self not only because the once very frequent and much loved historic trams have gone from normal service but also there was once almost no room to park the throng on visiting coaches at holiday times whereas today there is just one not very busy coach park near the football stadium. In better times when we were also able to enjoy the sight and sounds of AEC and Leyland was this fine Duple Dominant bodied Leopard LVS 423V turned out in Bassett's subtle blue and grey livery complete with winged motifs.
Posted by christopher at 02:37 No comments: 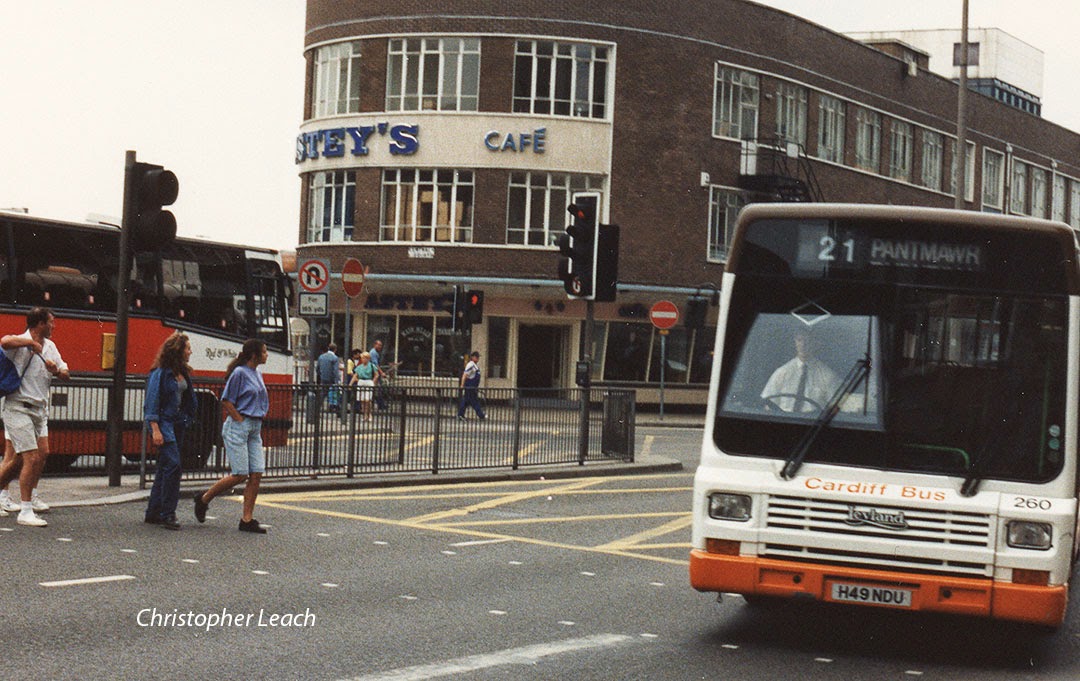 Once something of a treat was a visit to Cardiff Bus Station but even in the Nineties there was still quite a bit of interest. In this view a relegated National Express Plaxton bodied Tiger of Red and White arrives as a former Lynx demonstrator belonging to Cardiff Bus departs for Pantmawr.
Posted by christopher at 13:50 1 comment: 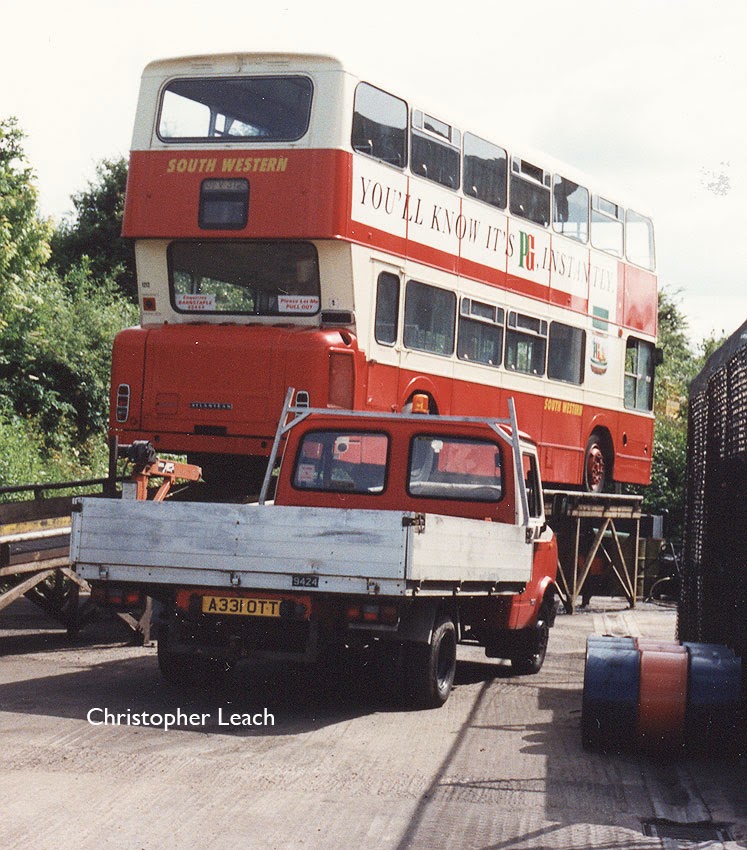 Most of North Devon's operations were along the tourist areas of that coast, but there was also another outpost at Tiverton and Exeter called South Western. One it's former Blackpool East Lancs bodied Atlanteans JFV 312S visits and recieves a steam clean at the main North Devon workshops at Bideford probably for it's MOT.
Posted by christopher at 03:11 No comments: