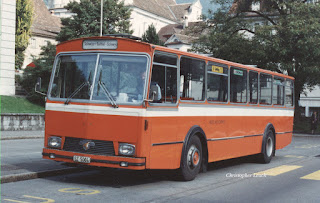 One of the nicest things about being interested in transport is it often takes us to those places conventional tourists miss. One of these places despite it's historical importance being where the Swiss Confederation of Cantons was signed is hardly known never mind visited by Brits. Also it is the name of a small canton too which is why this bus carries it as SZ. Once Leyland seemed to have it's own empire of nations and a few even found their way into of all places Switzerland and this Worldmaster, one of a pair looks a bit unworldly carrying the sort of very Swiss bodywork normally found on Saurer DUK's and a few FBW's too.
Posted by christopher at 16:19 2 comments: 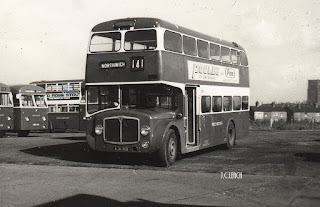 Although they could also be found elsewhere Northwich was the North Western garage most associated with the AEC Renown and when this was taken in 1965 fifteeen of these likable Park Royal bodied buses could be found here including Nos. 115-117.
Posted by christopher at 16:47 No comments:

DAF in Amsterdam on the 21 to Geuzenwald 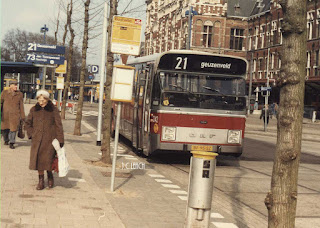 I don't know a lot about the bus operators in the Netherlands but by the time I went there with my camera Amsterdam had lost all it;s Leylands and DAF's ruled the roost.
Posted by christopher at 00:48 1 comment:

A Diamond Solo and an arichitectural jewel 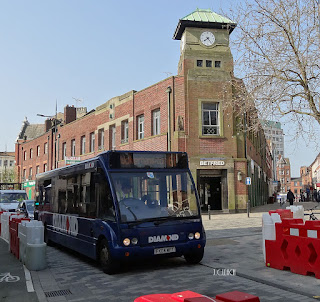 We don't always glance upwards but our towns and cities host some interesting buildings. This Art Deco influenced red brick and concrete block has a stark beauty and most have looked very imposing when it was built in the 20's or 30's. The Diamond Optare Solo of 2004 of course is not that old or interesting but once this street used to bustle with bus activity and as well as trolleybuses came Wolverhampton Corporation Wulfrians and Midland Red all-Leyland PD2/20 and the D9. I don't know about you but I haven't seen any other bus photos taken of this view.
Posted by christopher at 16:23 2 comments: 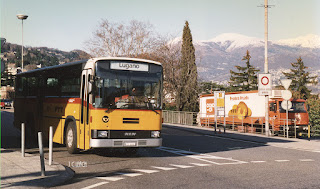 It can be wet in summer but Lugano is a good place to be in the winter as those snow covered Alps mark the border between cold Northern Europe and the milder Mediterranean region. After it absorbed the Swiss FBW and Saurer concerns Mercedes continued to build buses at Arbon to a local specification like this one for the PTT with Mercedes parts. As you can see they have the Co-op there too but the place to buy your bargain chocolate and eat cheaply are the Migros department stores.
Posted by christopher at 03:07 No comments:

Disruptive major road reconstruction,  snow and ice in Gothenborg and a not very pretty WHMA bodied Volvo articulated bus are the ingredients of this bleak winter scene
Posted by christopher at 02:48 No comments: 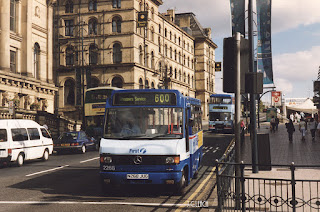 The First Group certainly had a rich variety of liveries before before Barbie became the norm. These included local colours which I liked as it gave buses a natural civic identity such as here in West Yorkshire like this First Bradford Mercedes in that city.
Posted by christopher at 15:35 No comments: 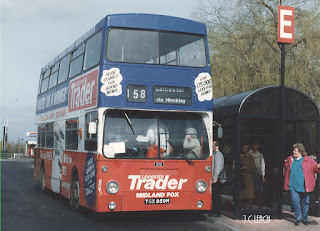 Midland Red had a number of important routes which many of us can still remember. One was the long and frequent 658 which ran between Leicester and Coventry via Nuneaton. For many years it was largely the preserve of the D9 and Hinckley which did a lot of the workings was unusual in normally operating hardly a single D7's and I can only remember seeing 4462. By the time Midland Red East had become Midland Fox the route had become the 158 but was still supporting double-deckers like this former London DMS at Nuneaton.
Posted by christopher at 01:58 No comments:

In the Nineties the London to Oxford corridor became particularly busy and hotly contested with frequent departures day and night as The Oxford Tube and Oxford Citylink slogged it out for dominance.  Here an empty Plaxton Paramount bodied Leyland Tiger arrives at Victoria Coach Station.
Posted by christopher at 15:59 No comments: 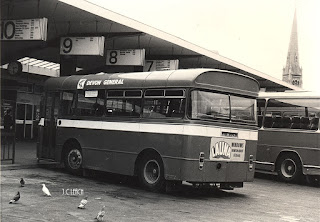 This was one of a few Midland Red Plaxton bodied Ford R192 buses that was chopped down to become a midibus. I imagine it was not a great success as more would have been so treated. Former 6359 was seen in Exeter after passing to Devon General which always needed small buses. This one was No.5 whilst it's sister YHA 362J was No.6.
Posted by christopher at 13:47 2 comments: 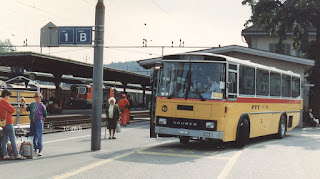 An important station on the Swiss post bus system is the small town of Brugg near Baden. In 1990 the local contractor (PAH) operated mostly Mercedes-Benz buses but there was still the odd FBW and like this example Saurer to be found.
Posted by christopher at 00:28 1 comment: 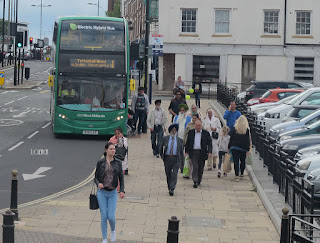 It's a nice idea but I wonder how many of the West Midlands drivers at Wolverhampton can remember for example that 5401 is Abigail or enthusiasts for that matter, a photo of her which was taken whilst still in that standout green hybrid bus  livery. Fortunately this fleet is fairly clean and reliable otherwise the ladies might complain why can't there be Ali and Alf's to grumble about too.
Posted by christopher at 15:01 No comments: 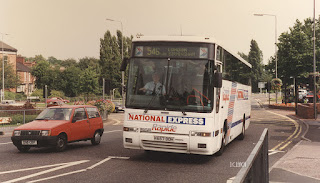 We don't see many National Express coaches calling in Stafford any more as they use the M6 as a by-pass and call in at Penkridge before the next main stop Wolverhampton. I recognised this driver as I sat at the front and talked to him when I returned from Stanstead on the 777. At this time in the late Nineties contractors like the Birmingham Coach company were encouraged to buy the standard Plaxton bodied Volvo B10M Expressliner as I think it was called.
Posted by christopher at 07:44 No comments: 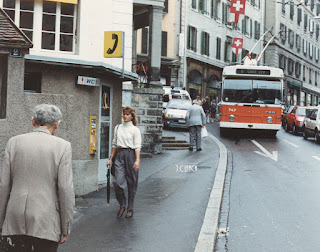 As it's New Years Day I thought I would post one of my most favourite photos taken in Lausanne. As you might guess obviously I wanted to get the girl in this shot and then she gave me such a lovely smile it made my day.
Posted by christopher at 01:56 No comments: