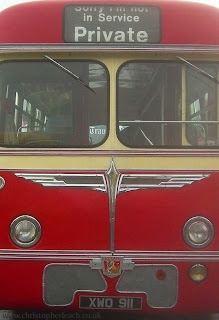 Perhaps the best known coach operator in wales was Hills of Tredegar with between fifty and sixty vehicles. As well as mostly Leyland coaches it also had a few service buses too and this early Leopard L1 dating from 1960 has been preserved. XWO 911 seen at the bus rally in Merthyr Tydfil it shows off the features that were so characteristic of these Burlingham underfloor bus and coach bodywork.
Posted by christopher at 16:35