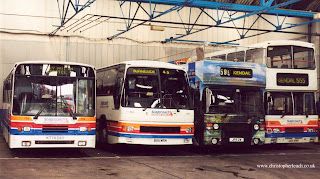 Ribble had a garage at Station Road in Kendal which also shared a small part of it's allocation of forty-eight with Garstang and Grange. Following Privatisation it passed to Stagecoach who covered it's buses in these candy-stripes. Still I am rather impressed as the company which like Ribble kept it's predominately white panelled fleet looking clean and smart. The two centre vehicles a Duple Laser bodied Tiger and the open-top ECW bodied Olympian are typical NBC stock and came from Ribble whilst the Alexander bodied Olympian and Volvo single-decker were very typical of Stagecoach at that time. When Stagecoach took over Greater Manchester South it divided it's operation so that the former Ribble operations became known as Cumberland long used by Ribble's smaller BTC neihbour to the west of the county which was also now owned by Stagecoach.
Posted by christopher at 04:28