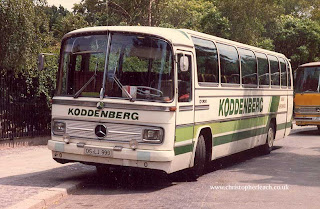 Rather in the same way that Plaxton in the Sixties came up with a winner in the early Sixties with it's modern looking Panorama range which despite many face lifts and name changes lived on till the Eighties, Mercedes-Benz coaches and Setra too followed the same 'if it's not broken' philosophy to it's designs. It is easier in hindsight to judge as somewhere along the line and one of these had to be the best most time enduring version. Of course livery helped and this fine 0302 in Berlin with it's natural flowing lines and 'fishy mouthed front' of Koddenberg looks very pleasing. By 1982 it was getting old too as a new version the 0303 came along in the mid-Seventies. I feel they spoilt this crisp design by squaring it up and trying to make it more eye catching with plastic and metallic trim.  Also this beauty also reminds us of those many bonneted lorries the great German made too selling all over the world.
Posted by christopher at 02:59