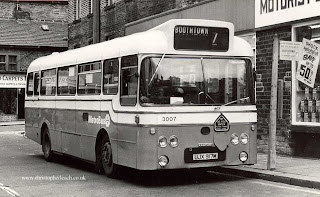 The great thing about the British Municipal operators is they were all quite different whether it be by size, vehicle requirements or more importantly the whims of the Transport Committee and General Manager. Sadly all of this was to disappear when many in urban areas were absorbed in to PTA's as happened when Halifax became part of the West Yorkshire Passenger Executive. It's last delivery of new single-deckers before this took place were some attractive Leyland Leopards with Plaxton bodywork like 3007 UJX 917M which had been No.7 when new in 1974 just before the takeover. Boothtown it's destination became a household name in the Seventies as one of the sinister haunts of Sutcliffe the so-called Yorkshire Ripper who at night stalked and murdered prostitutes in the district.
Posted by christopher at 11:46