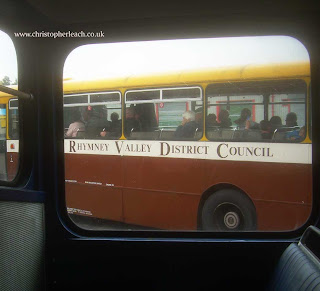 I find Bus Rallies to be a pleasant day out going somewhere different and being with friends. As for the events they are a bit strange and rather artificial. Bus rides are certainly a plus but can be a bit boring when one has to visit a local brewery on an industrial estate as happened at Merthyr Tydfi last week-end. I could have ridden on the East lLancs bodied Leyland Leopard which once belonged to Rhymney Valley as it's 87, PWO 87Y but opted for a much more traditional half-cab bodied AEC Regent of South Wales Transport instead especially as I had travelled down on another Leopard..
Posted by christopher at 09:03