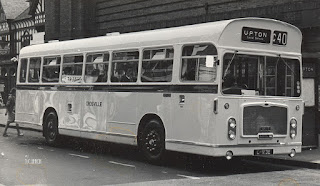 I know it was better and we quickly got used to it but I was a bit disappointed when ECW added BET front screens to the Bristol RE. It not only lost that unique look it spoilt the whole concept of the design as like the Bolton Atlantean it was designed to be uncompromisingly angular and boxy. There were practical reasons for the change too as flat screens cause dazzle at night and it was hardly aerodynamic. This Crossville example seen when brand new in Chester certainly looked smart in the cream and black coach livery.
Posted by christopher at 05:35 1 comment: Links to this post

Such A Grey One in Bolton 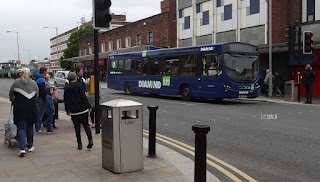 Well I consoled myself by thinking the forecast had been for rain and at least I took some photos in Bolton. It was not far away though and very grey and in situation like this where there is little contrast today's colour photography was still the best option. This was an important juncture as it was August 2019 and Diamond was about to buy out First Bolton.
Posted by christopher at 02:50 No comments: Links to this post 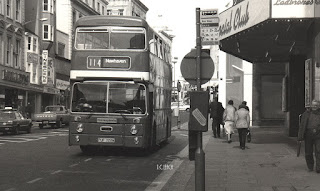 Having traditionally always been an operator of mostly Leylands the link with the past was quite gratifying when Southdown was one of a select few allowed to have smart new Park Royal bodied Atlanteans with the NBC. These AN68's were their first and I don't know if it was just because they didn't like them but they were later totally replaced by the NBC standard Bristol VR instead. No. 722 was seen in Brighton in the early Eighties.
Posted by christopher at 00:49 No comments: Links to this post 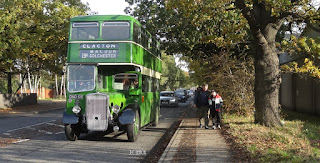 The Lincoln transport museum running day is always held right at the end of the season at the beginning of November and the weather is different every time. In 2019 it was a taste of what was to come as it was dull and damp and I congratulated another photographer because at least they found a brief moment or two of sunshine that day. As it turned out I see I was quite fortunate too for this a rather super shot of an Eastern National Bristol K5G of about 1948 and it even carries a Clacton garage plate. A lot of people as well just enthusiasts love things like this seventy year old bus for it is the Britain we loved and can't bring back.
Posted by christopher at 02:10 No comments: Links to this post

Stafford: The Rise and Fall of Arriva and First Bus 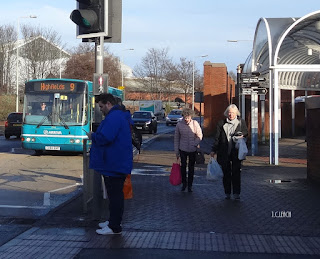 This photo of an Arriva Wright bodied VDL was taken in December 2018, It's a mundane enough scene but we shouldn't take things too much for granted as nothing stays the same for long and quite soon as far as Stafford is concerned both Arriva and First Bus might be gone. Yes we should still at least get Arriva coming in from Telford but it's funny really for having disliked them for so many years I will be quite sad to see them go. Maybe in this new decade we will see some of the big operating groups whither or crumble and then in their place a new generation will come along to get too big too and do the same. Well if nothing else it might be more interesting even if the buses themselves won't be.
Posted by christopher at 02:41 No comments: Links to this post 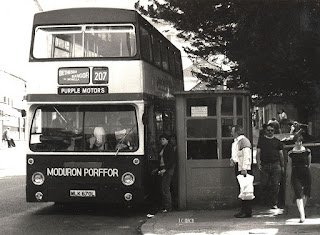 The North Wales coast is most remembered for it's Crosville buses but there had always been interesting Independents too and following Deregulation and cut-back they seemed to expand and maybe even for a while thrive. Sadly some got taken over by Arriva and others went bust but one of the best remembered was Purple Motors of Bethesda who supplied a good variety of buses could be seen in Bangor including this former London DMS Daimler Fleetline.
Posted by christopher at 16:12 No comments: Links to this post

I'm not sure this Diamond Optare Solo looks expensive and sparkles enticingly but they are certainly spreading their network. Of course they have been well established in the West Midlands for a few years now and are a familiar sight in Walsall.
Posted by christopher at 16:28 No comments: Links to this post