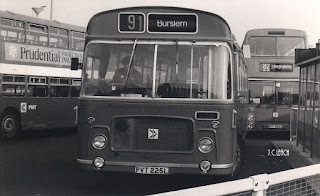 In Newcastle Bus Station was a PMT Bristol RELL and more interestingly behind it the Foden bought for elaluation for the NBC.
Posted by christopher at 16:42 No comments: 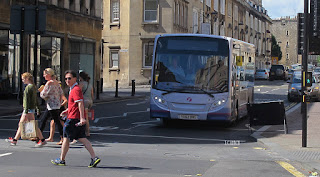 Even though the colour of this First Bus Enviro reminds me a bit of those 'Yogtop' cherry flavoured yogurts  of my youth the modern livery doesn't look too out of place in the lovely city of Bath.
Posted by christopher at 16:27 No comments: 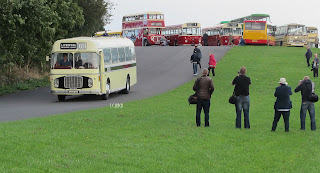 As the 2016 Showbus Gathering draws to a close at Donnington Park an army of enthusiasts gathers near the exits to make sure no vehicle leaves without being recorded for posterity.  Running the gauntlet was rather fine Bristol RELH ECW bodied in Crosville's old cream and black coach livery.
Posted by christopher at 04:11 No comments:

The Arriva Rocket to Rocket Pool 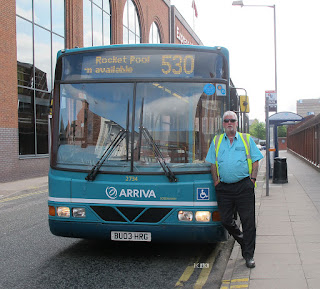 I told the pleasant driver I was going to photograph his bus and gave him the option of being in or out of shot, instead he posed for me in front of his Wright bodied VDL. What a difference it makes being a pretty young lady like Jojo lol, for as we know drivers can be quite rude and snotty with enthusiasts these days, however having said that I don't get much trouble. For a while Arriva competed with the Optare Solos of Banga Bus on the 530 route from Wolverhampton to Rocket Pool but even shorter doudle-deckers were a bit too big to weave the  maze of narrow estate roads. Also Banga were more popular with the public as Arriva don't stop for people unless they are at the stop and this caused a degree of consternation as just giving a wave from the other side of the road no longer worked as people ventured towards the hurrying bus, and yes they were always in a hurry too I don't think they wanted people to get on if they could help it.
Posted by christopher at 09:15 No comments:

A West Midlands Travel Metrobus leaves Wednesbury bus station bound for Dudley and in the background is a once familiar sight in the Black Country a well laden wagon carrying steel. I can't remember the owner any more of the local Seddon Atkinson I wonder if it's 'Shorthouse' or something like that.
Posted by christopher at 02:33 No comments: 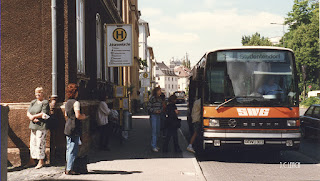 Just think there are so many places most of us have never heard of abroad unless they have maybe a successful football team. Also of course we tend to go to these places not just out of choice and I quite like the idea of feeling a bit indifferent about the place standing on a street corner as in time it gains it's true position as a big or tiny piece in the jigsaw of my life. Actually I have good memories as I have an old girlfriend who lives here called Marion and who resides on this bus route to the 'student village'. I met her when she was an exchange student, I think she found Stafford and it's students a bit of an education.
Posted by christopher at 14:36 No comments: 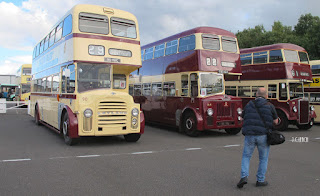 I imagine had one been asleep in a comma since the Sixties and miraculously woke up they might well be amazed at how much of our once mundane past has been preserved. It seems the 'best' operators often seem to have the most buses in preservation and not surprisingly then that the smart impressive fleet from Leicester City Trsnsport is well represented. Looking at first glance a bit like carrying an MCW body the middle bus was a Leyland PD3/1 carrying a Willowbrook body.
Posted by christopher at 15:34 No comments: 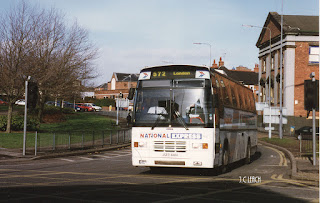 National Express wanted all of it's contractors to not only paint coaches in their livery for a better job rate but also purchase these Plaxton bodied Volvo B10M coaches of their specification which if I remember rightly they christened 'The Expressliner'. A lot of the former NBC companies did just that including Cumberland whose coach on the Rapide 572 Service to London was seen passing through Gaol Square in Stafford one winter day.
Posted by christopher at 15:58 4 comments: 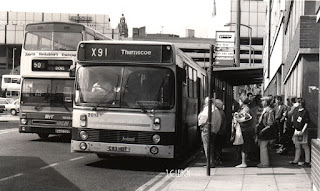 It will take a few more people than this to fill this DAB-Leyland articulated bus in Sheffield.
Posted by christopher at 15:11 No comments: 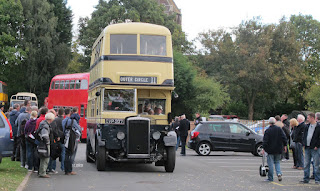 It's hardly surprising the Autumn open and running day at the bus museum at Wythall is so popular when not only does it always seem to attract lovely weather this year there were forty buses to take rides on with some journeys taking about a hour both into the city and places like Henley in Arden. One I would have liked to have ridden on was this 1937 Birmingham Daimler COG5 with MCW bodywork.
Posted by christopher at 15:10 No comments: 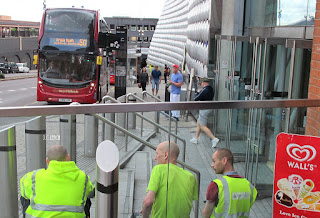 An unusual view of a West Midlands Enviro in the latest maroon livery beside the Bull Ring Shopping Centre.
Posted by christopher at 09:00 No comments: 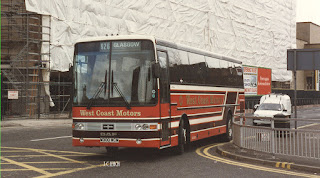 In the attractive colours of small Scottish operator West Coast Motors was this Van-Hool bodied DAF seen in Glasgow.
Posted by christopher at 08:43 No comments: 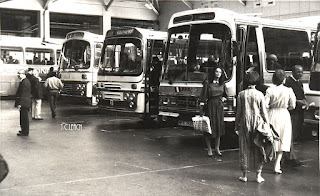 For a few moments my heart jumped I couldn't believe the registration of the RRH Volvo for I thought it was on one of my vans, in fact of course I didn't have MFK 768V, I had MFK 818P and then EDH 768T. Carrying the operator's initials RRH there were always plenty of hired coaches helping out on National Express work at busy times. Also in this peak hour view were no doubt more frequent visitors, a Bristol RE of Eastern National and a Alder Valley Leopard.
Posted by christopher at 14:49 No comments: 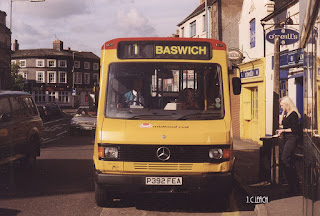 To think at one time there were about twenty Mercedes-Benz minibuses with Midland Red North at Stafford including 392 and 393 with Alexander Sprint bodies delivered new. That's right even in the small bus era half or the buses had come from elsewhere and unlike these some were worse than others.
Posted by christopher at 02:24 No comments: 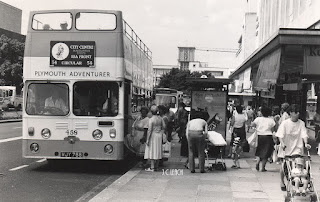 I'm afraid by the time I took this photo Plymouth was awash with those awful minibuses, but at least to see over the top of them all there were still a few Corporation Leyland Atlanteans about and it was even better still to ride on one of the open-toppers as the rather pleasant engine noise drowned out the ubiquitous shrill squawking of greedy seagulls. This one called 'Plymouth Adventurer' wasn't doing anything exciting or bold just heading down to the Barbican and Hoe and back. Now No.458 this bus WJY 758 was new as 158 in 1962 and was seen in the late Eighties.
Posted by christopher at 14:20 1 comment: 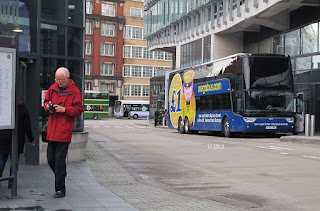 Posted by christopher at 14:48 No comments: