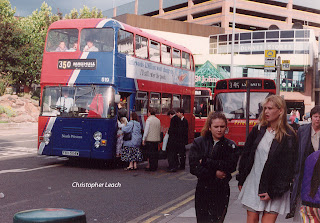 Ribble had nearly only double-deckers at one time in the Liverpool area, these Leyland PD2's and PD3's were in turn replaced by Park Royal and as seen here ECW bodied Atlanteans. In mid-life Former 1504 a 1978 bus was seen in the city centre as a North Western after the company was split.
Posted by christopher at 07:37 No comments: 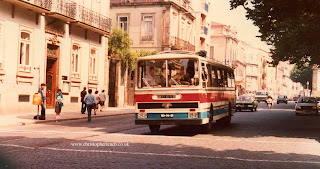 I think we could all do with a bit of sunshine and warmth so here is a colourful Portuguese Utic bodied Leyland rumbling over the hot dusty cobbled sets in Porto in 1984.
Posted by christopher at 03:38 No comments:

After the NBC absorbed the former North Western garages at Buxton and Matlock into Trent  the old fleet was quickly dilluted as can be seen here in 1974 with the arrival of Alexander bodied Tiger Cubs parked alongside former NW Bristol RE  No.346.
Posted by christopher at 02:21 No comments: 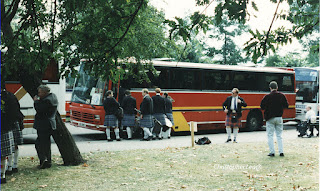 This party from Scotland had either come down to Hyde Park in London for a Scottish event or to escape from all the Routemasters in Scotland. August 8th 1993 was a warm and sunny and it added Duple 320 bodied Dennis Javelin A19 SMT to my collection.
Posted by christopher at 01:42 1 comment: 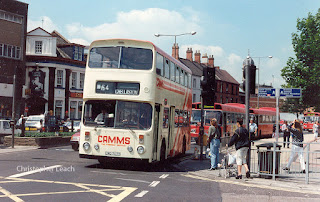 Nottingham based Camms based near the old Raleigh Bicycle  factory was well known for it scruffy but interesting second-hand Leopard and Reliance contract fleet plus quite a few Fords. Like others it went into bus work following Deregulation in 1986 and ran a number of former Hull Metropolitan double-deckers. A tidy looking ex-SYPTE Alexander bodied Atlantean CWG707C was captured alongside Trent Nationals in Derby in the Nineties.
Posted by christopher at 05:51 No comments:

Taking it easy in Lausanne 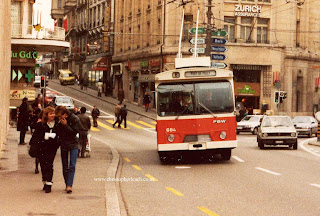 Because of it's rail interest the road transport operators of Switzerland tend to be ignored by transport enthusiasts despite their varied bus, trolleybus and tram systems. On Lake Geneva opposite France Lausanne had quite a laid-back rather romantic feel to it and operated some rather historic trolleybuses and No.684 seen on a dull morning in the early Nineties dated from 1969 was hardly the oldest. I might be wrong but if it is from that series this FBW carried locally built Eggli bodywork
Posted by christopher at 03:10 2 comments: 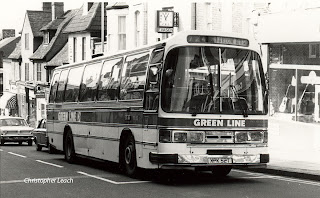 By 1979 new AEC's were becoming rare but a not very old a 1979 Green Line Duple bodied Reliance 6U2R numbered RB 52 XPK52T passes through pleasant St Albans sunshine on it's way to Harlow.
Posted by christopher at 02:41 No comments:

Flyde Atlanteans merge with those of Blackpool 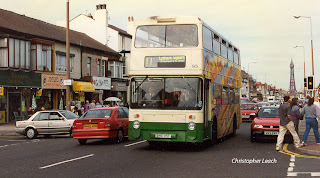 Blackpool Atlanteans were bodied by East Lancs but they became more varied when the smaller nearby Fylde system was merged. The Lytham St Annes operator had always preferred Northern Counties products from Wigan as opposed to those from Blackburn. The Promenade area is very much for the holidaymakers but away from the Seafront life goes on as usual and No.95 RHG 95T tries to hurry through the Saturday traffic as it heads back to Lytham.
Posted by christopher at 02:33 4 comments: 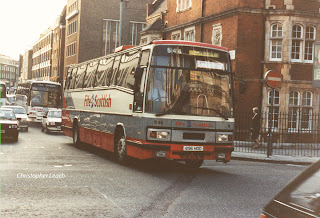 Judging by the late afternoon evening hazy glow it must have been very hot and sticky in London one Saturday in August 1991. But the fading light was still good enough to catch a rare liveried visitor in the shape of this Fife Scottish Plaxton Paramount 3500 bodied Volvo B10M No.596 Reg 896 HOD far from it's home at kirkcaldy leaving Victoria Coach Station on a National Express 545.
Posted by christopher at 07:09 No comments:

Ipswich having to made do with second-hand buses 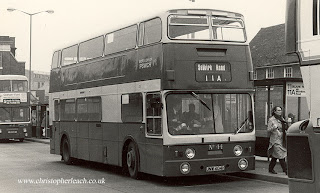 At one time there was a generous enough budget to ensure the various Corporations could regularly buy fleets of new buses, but by the Eighties cash constraints meant every penny had to be counted and even some of the most up-to-date municipals like Ipswich had to swallow their pride and make do with some second-hand stock alongside the new buses. I felt the attractive Roe bodied Leeds Atlanteans it bought from the West.Yorkshire PTE fitted in rather well here as did the Bristol RELL single-deckers it purchased from Leicester.
Posted by christopher at 08:48 No comments:

HT: More Volvos in the centre of Copenhagen 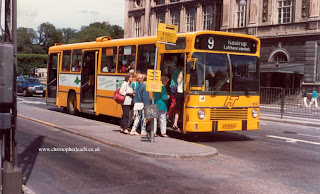 Rather like the old London Transport that had a separate green painted country fleet, HT the controlling operator for the greater Copenhahen area was almost like two fleets as in the centre it operated numerous  DAB's but in the suburbs and slightly beyond pretty well all you saw were Aabenraa bodied Volvos. By the Nineties not only were Scania buses making a impact in the city centre those Volvo's were becoming more numerous as well. Actually the HT garages were split into four districts and although the outside buses were different it was probably due to the Volvos being more suited to the lighter faster work. At the end of the Eighties No.1619 was in Copenhagen on Route 9 to Kastrup Airport.
Posted by christopher at 02:45 No comments:

Blackpool: Do we have to stay all day? 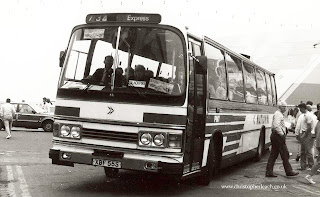 I must admit I rather enjoy wet Bank Holiday Weekends as I stay in the dry and it gives me an excuse to add pictures like this of  hapless day-trippers who have just arrived in Blackpool on a PMT Duple bodied Leopard from the Potteries glumly looking forward to fed-up kids who can't go out on the beach and a day of soggy clothing. wasted money and of longing to get back home for a nice cup of tea. At least the Blackpool Illuminations trips hadn't started yet so with luck they should be away again by Five-Thirty to join the traffic jams on the M6.
Posted by christopher at 02:39 No comments: