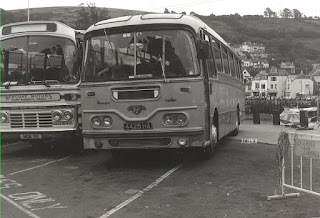 Passing out of Devon into the wilder realms of Cornwall was rather enjoyable as it seemed like some sort of fifteen-year time-warp. This was largely due to the number of elderly classic buses to be found working with the Independents, particularly Deeble of Upton Cross. Seen at the picturesque harbour in Looe was a former Gliderways of Bearwood Harrington Cavalier bodied Leyland Leopard.
Posted by christopher at 14:38 1 comment: 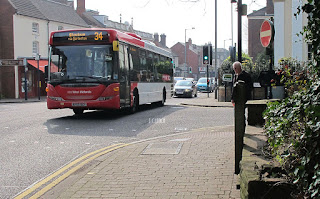 A National Express West Midlands Scania passes through Bilston in 2016.
Posted by christopher at 14:24 No comments:

Bristol VR's with Southdown in Brighton 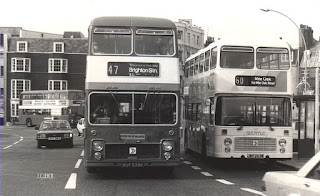 Even though traditionally Southdown had been very much Leyland orientated in the NBC era it shunned the Atlantean, even disposing of it's much better AN68's in favour of the Bristol VR and here are three examples in Brighton.
Posted by christopher at 02:48 No comments: 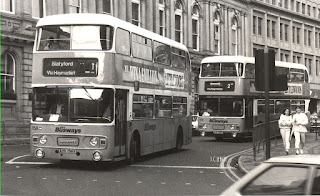 For a number of years a trip to a town or city with it's own bus fleet meant we were treated to the screech and roar of the Atlantean, Newcastle on Tyne had a large fleet as did Northern General which included Gateshead and District. Of all the PTE liveries I think I like that on Tyneside which retained yellow and cream even into it's later post Deregulation Busways day,. most had Alexander or lookalike fronted bodies by MCW.
Posted by christopher at 00:30 No comments: 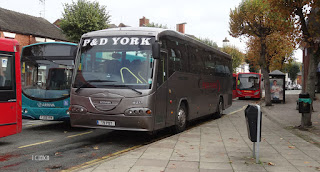 Maybe I'm just getting old but not only buses but coaches are not very pretty these days. There's a selection here in Stafford headed by an Irizar bodied Scania with an ugly front.
Posted by christopher at 02:52 3 comments: 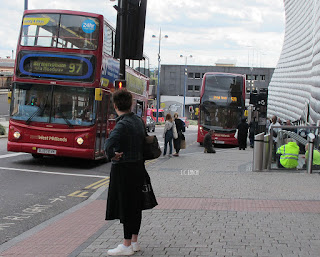 West Midlands buses outside The Bull Ring Centre in Birmingham in 2016 including Dennis Trident 4461.
Posted by christopher at 14:02 No comments: 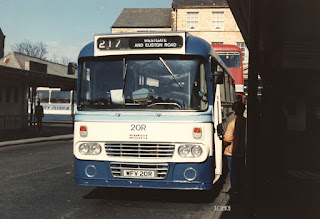 The very grand sounding Lancaster city Transport stayed faithful to Leylands till it was eventually devoured by the voracious Stagecoach group. Leopards were popular and they included the Alexander Y-type which was a canny buy and they proved to later make popular second-hand acquisitions after sale.
Posted by christopher at 16:15 No comments: 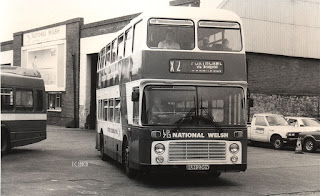 Bridgend had been the Western Welsh biggest garage but by the time I took this in the Eighties there were not so many buses to be seen. National Welsh had a lot of Nationals and Leopards at the expense of the double-decker but there were still some around like this Bristol VR bound for Porthcawl.
Posted by christopher at 14:40 1 comment: 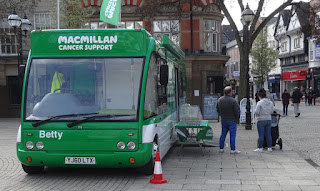 Macmillan Cancer Support is what it says and I know that as they provided me with a cancer nurse when I was ill but it is funny that a charity which promotes togetherness should have a bus called a Solo. Modern buses have uses apart from stage carriage service and with it's large windows and low-floor this Optare midi-bus model makes a good exhibition vehicle as seen here in Stafford.
Posted by christopher at 02:48 No comments: 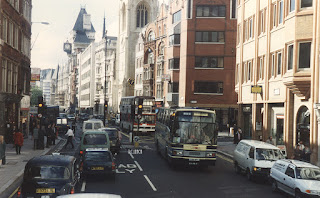 All the excitement of London, one thing that is always fascinating is one never knows what's around the next corner even if it's only a Whippet Plaxton 3500 bodied DAF and a London Suburban Titan heading down Fleet Street.
Posted by christopher at 16:46 No comments: 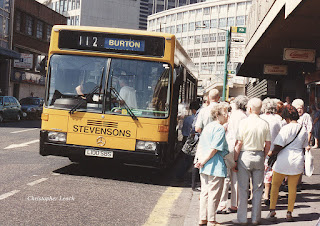 Mercedes-Benz in the Nineties looked as though it might soon be making heavy inroads into the UK bus market but it didn't really happen. Minibuses and Wright bodies on the reliable O405's were quite popular like this Stevenson's example but the Citaro which followed gave off mixed messages especially fires and bad publicity from the London bendibuses. Since then they have been sold all over the world so they must have sorted out all the problems but I guess the Brits prefer to stick with their Alexander-Dennis Enviros and Wright bodied VDL's.
Posted by christopher at 00:19 No comments: