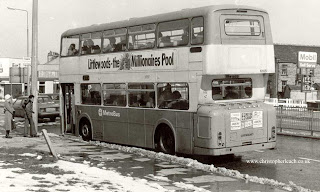 We've had some bad winters recently but they don't compare to the one of 1981-2 when not only was there a lot of snow diesel in tanks froze and lorry drivers lit fires under their waggon on the hard shoulder. Of course if the weather forecast was really bad I was sent over to Yorkshire having to brave the M62, but if nothing else it produced some great winter bus scenes like this Atlantean..
Posted by christopher at 09:06 2 comments:

When Setras took over the road and passes around St Moritz 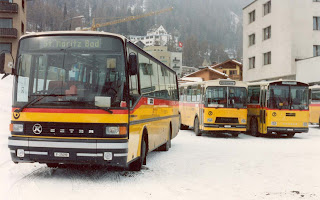 At the start of the Nineties there was a bit of variety at St Moritz but five years later the FBW and Saurer types seen here at the PTT Post Bus Depot would be replaced by German Setras in the tourist areas. But unlike the Swiss built buses that seemed to never age the modern ones would not enjoy extended lives due to things like salt corrosion.
Posted by christopher at 09:14 No comments: 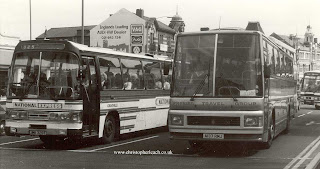 The mid-day departures from Digbeth were always worth hanging about for especially on a Friday. As well as coaches in all white were more attractive  liveried examples like metallic-blue  Duple Caribbean bodied Leyland Tiger of Premier Travel probably heading for Cambridge whilst the older Duple bodied Crosville Leopard was bound for Holyhead.
Posted by christopher at 07:07 1 comment: 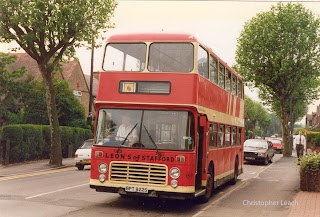 Leon's one of Britain's top coach fleets often seen travelling in hordes carrying Wolves Supporters to away matches are not really noted for their elderly double-deckers, but the odd one did appear in the Nineties for contract work as can be seen from the former United Bristol VR BPT 922T seen on the Weston Road in about early May when the trees were looking particularly green.
Posted by christopher at 03:17 No comments: 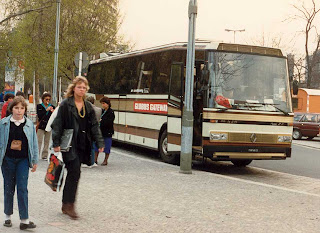 Berlin Zoo is a great place to catch sight of all the visiting coaches, and as well as German vehicles can be found more variety like this Padane ZX bodied Renault from Italy working for Globus Gateway. As with everything else today there is not so much variety between nations on offer.
Posted by christopher at 07:26 No comments:

Luton and District A145 EPA at Victoria in London. 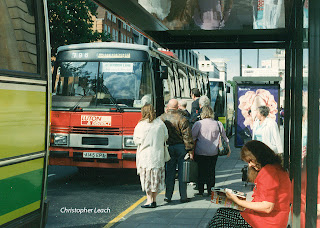 Sometimes trying to squeeze the subject into the viewfinder can be rather rewarding as can be seen from this view taken in London at Buckingham Palace Road. Once a Green Line coach itself this Plaxton Paramount 3200 bodied Leyland Tiger A145EPA was still on a Green Line service to Cambridge for Luton and District..
Posted by christopher at 03:19 No comments: 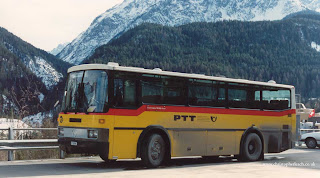 Well these Mercedes-Benz 0303 buses were not so very rare with the PTT but catching sight of a dirty one was. P23324 of 1991 was seen at the ski resort of Scoul which is tucked right in the top left-hand corner of Switzerland with Austria on one side and probably in sight here was nearby Italy.
Posted by christopher at 07:58 No comments: 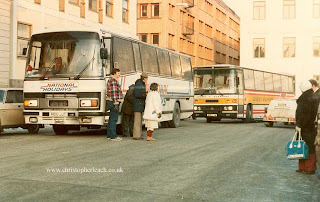 A number of years ago a party of us from Stafford went with Leon's on a DFDS Mini Cruise to Gothenborg using the ship as a hotel. By their standards it wasn't cold that January but it must have been freezing taking an excursion on Shamrock & Rambler A100 JJT as it had no heaters working.
Posted by christopher at 03:29 No comments: 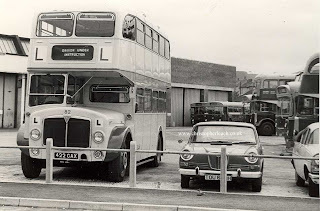 Seen at Caerphilly this rather fine lowbridge Massey bodied AEC Regent from the former tiny seven bus Bedwas and Machin Urban District Council fleet became a trainer in a combined Rhymney Valley fleet. In the early Seventies most surviving urban Municipal fleets worried that they might like so many others get swallowed up into the huge area PTE's. So as not to look so attractive to the planners some like these neighbouring concerns merged into one, Caerphilly with thirty buses was the most up-to-date whilst probably Gelligaer with about the same was the most interesting
Posted by christopher at 02:22 No comments:

The return of Lancashire United buses to Bolton 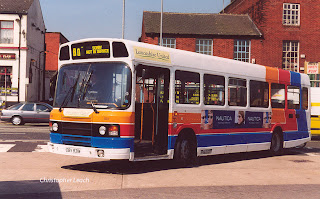 Waltzing through Chester Around and Around 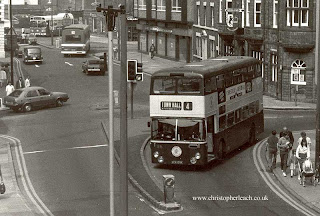 Waltzing through Chester with Daimler Fleetline 59 WFM159M. As these three buses negotiated the one-way system in Chester I tried to get them all at the same angle and it almost worked. Elevated positions are good for bus landscapes and this one worked well for a change as often with concrete city centres there are empty areas and the detailed interest is too far away.
Posted by christopher at 11:47 No comments: 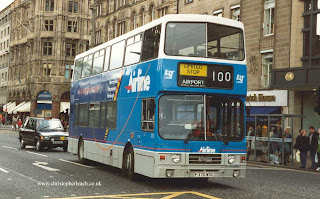 In a change from the usual Lothian madder red and white livery was F370 WSC a Leyland Olympian in a blue based livery to go to the Airport on Route 100. It is seen turning off Princess Street.
Posted by christopher at 07:38 No comments: 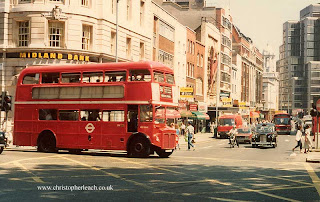 RM 2000 was new to Dalston but by the early Nineties it was to be found working from Peckham on the long north-south 36 Route which was to remain an RM stronghold, it was seen passing through Victoria.
Posted by christopher at 08:53 No comments: 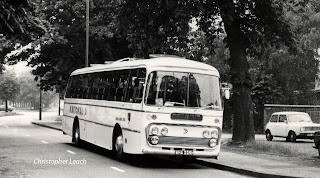 When driving around the Birmingham area I think, I had to stop to grab a photo of this Midland Red Leopard as 6229 had been new to Stafford Garage. They came with earlier style Panorama bodies but to be honest I find these gracefully curved bodies rather  more attractive than the more simplified Panorama Elite.
Posted by christopher at 04:22 No comments: 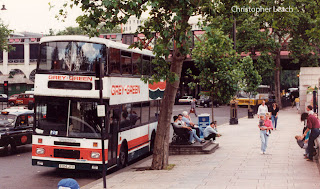 As well as turning to double-deckers to work Deregulated services in London like the 24 Cowies Grey Green had a few seated as coaches as well like this Alexander bodied Volvo B10D seen on The Embankment in London.
Posted by christopher at 09:03 3 comments: 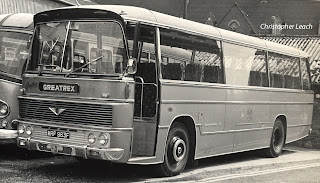 In the late Sixties Greatrex Tours attempted to move away from lightweights and bought three Duple Commander bodied Leopards. The delayed AEC Reliance had been their first choice and sadly they only lasted a few years before being sold to Rennie of Dunfermaline where one was good, one was bad, and one was average.
Posted by christopher at 03:49 No comments: 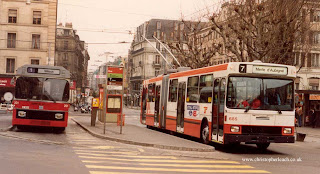 Like New Year or not, at least it's one time of the year when we remember what we were doing. This was taken on Ist Jan 1989 in Switzerland where public transport operates 365 days a year. The new trolleybus is a NAW whilst No.201 is a Swiss Danish mix, a Saurer powered Dab-Leyland.
Posted by christopher at 03:08 No comments: