Denmark: Running between the islands 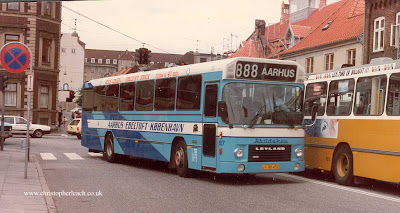 With the exception of mainland Jutland above Germany where Aarhus is  the largest city with in the Eighties a population of 250.000, the rest of Denmark is a series of big and samall islands and moving between them made the country seem a lot bigger. Today many are connected by spectacular modern bridges but as seen here a trip to Copenhagen via the ferry at Ebeltoft would have added 1.40mins on to the journey of this Ahidskau DAB Leyland in 1982. It even took five hours to get to Copenhagen by train which was far quicker and to get from the top of Jutland on a Sondergaards Rutebiler to the capital would have taken a bottom numbing nine-hours!.
Posted by christopher at 05:24

This is a very attractive and picturesque corner of Denmark. I spent my holidays near Ebeltoft once but wasn't aware of any bus service. What a pity I didn't do more research.