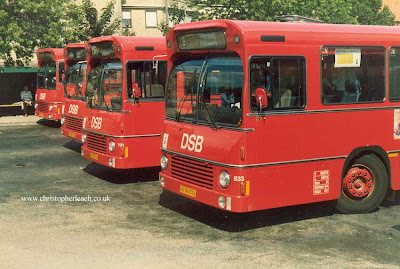 These Aabenraa bodied Volvos were the standard Danish Railway's bus at the begining of the Eighties and four of them are see here in Kolding working the Town Service which when I came in 1979 was still being worked by it's own DAB-Leyland buses. Kolding and Horsens were sub-depots of Vejle with a total allocation of some ninety buses. I have to say like the post Bus I rather like railway buses as they have a rugged big company image and tend to be scattered around the country whichever it may be somewhat disproportionately in little pockets of activity.
Posted by christopher at 04:01