Don't worry Dad, there can't be any more crime in Rio than there is in Liverpool 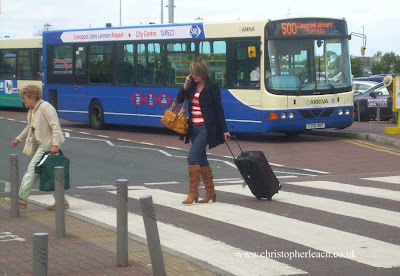 No of course even the most notorious areas of Liverpool aren't as dangerous as living in the poverty ridden cities of Brazil I expect. This VDL Wright bodied bus Arriva uses a rather more attractive more blue coloured version of it's usual corporate livery for it's airport services from the city centre and to Manchester. Up till the Seventies each Vehicle Licencing Centre had it's own set of registration letters and most big towns had their own personal identity to make one feel at home. Today it is done by the region but even the buses on Merseyside don't carry a more local marque as these buses starting with C for Cymru are registered in Wales next-door perhaps I expect because of it's close links with the former North Wales operations of Crosville Wales nearby. However I still like looking at registrations and a reminder of the good-old-days is the totally random BKF at the end which indeed would have been from Liverpool as they had a whole block from KA to KF including quite valuable if you owned one, K on it's own.
Posted by christopher at 01:57

You could tell that AFA was from Stoke so as NUA. Now,knowing that DV and DU are Brummies plates, is as far as we can go...

Any pictures of a Wright body wearing SLF Alexander darts fisheye headlights? ( Those rectangular ones )I saw one from Shrewsbury once, and never saw it again!

FA was originally Burton-on-Trent which was later integrated into Stoke. UA was Leeds, but in the latest order of things Birmingham are those starting with B. D stands for The Dee and covers Cheshire, Shorpshire and Staffordshire with the last of this series being alloted to Stoke as is DV and DU.