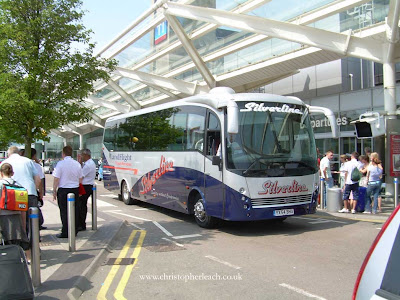 I don't take enough interest in the current bus scene to know everything but my guess is this rather attractive Mercedes Benz 814 has bodywork by the Optare subsidiary ACI as a block of them were registered together at the same time. This Silverline coach is in those classic silver and blue airline colours that remind me a bit of Samualson New Transport who used to be based at Eccleston Place next to Victoria Coach Station. YX54-BHA carries a registration of a earlier generation of buses that once visited here when Birmingham Airport was known as Elmdon as Midland Red BMMO D7's from the 1957 batch were numbered 723-772 BHA and Digbeth's 4732/8/41/52 and no doubt others passed through on the 159 to Coventry. However even this shot has become the stuff of nostalgia as following the car bombing a few years ago at Glasgow Airport only taxis and shuttle buses get this close to the terminal and we have to pay to use the car park whether we're picking up or dropping off.
Posted by christopher at 07:27

The combination of the modern-looking coach and the glass canopy make for a great effect.

Yes the Airport does look good on a sunny day