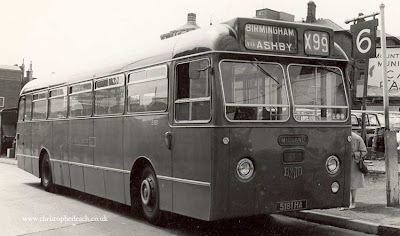 With one-hundred examples Midland Red operated more than all the other deliveries of this type of early 36t BET style body put together. When ordered they came as a bit of a surprise as the company usually only took it's own BMMO buses built at the Carlyle Works in Edgbaston, but they were to join another 100 Leylands, double-deck PD2/20's delivered in 1952/3. At the same time 50 Alexander bodied Daimler Fleetlines were ordered for 1963 as the company stepped up vehicle replacement and hinted at the future. Originally the LS18 bodywork order was to be split 50-50 between Willowbrook and Weymann but in the end Willowbrook build 75 buses including the twenty-five LS18A dual-purpose semi-coaches for the long X-Series Limited-Stop routes like the X99 from Birmingham to Nottingham which passed through Tamworth about half way where this bus No.5181 was based. With just one exception, an extra bus, all Tamworth's LS18 Leyland Leopards were of this LS18A variant which looked exceptionally smart with their black tops.
Posted by christopher at 03:42