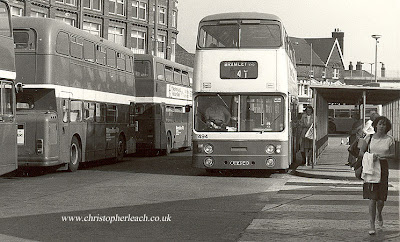 An Eighties image with plenty of buses to be seen in the Central Bus Station of Leeds and as well as the attractive Roe bodied West Yorkshire PTE Leyland Atlantean painted buttermilk and verona green we also catch sight of three West Riding vehicles in NBC poppy red but also carrying the PTE logo on their sides. Squeezed between an ECW Bristol VR and a fairly recent Leyland Olympian is a Northern Counties bodied Daimler Fleetline a type popular with many former BET operators in the early years of the National Bus Company like this a 1972 K-Reg example. The operator of this bus West Riding of course which with at one time a fleet numbering over 450 had not been part of the major BET Group but was in fact Britain's largest Independent.
Posted by christopher at 08:31