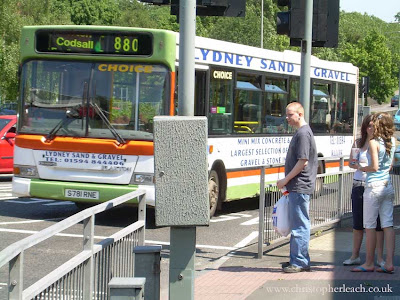 As well as meeting delightfully painted Warstone 'Green Bus Service' Mercedes minibuses and even on occasion an elderly Leyland Leopard each afternoon on my country school run skirting the fringes Wolverhampton I also meet the 880 Route often in the narrowest places. Before they became part of D &G this subsidised service was next worked by Choice of Willenhall who ran this newly aquired former Dukes Plaxton bodied Dennis Dart complete with local ads for a Lydney Quarry far off in the Forest of Dean. Lydney of course was once a part of the Chepstow based Red and White empire but now before receiving D & G light blue and cream this bus was seen on a former Green Bus route as this too was once a part of Warstone's extensive rural South Staffs empire.
Posted by christopher at 15:59