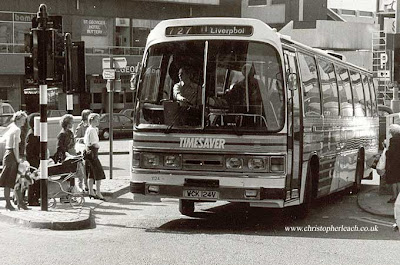 Before they were broken up and sold off the various National Bus Companies at last were encouraged to forge stronger identities especially as far as more upmarket coach operations were concerned. This included their local limited stop and area express operations and Ribble created 'Timesaver' as was worn by this Duple Leyland Leopard No.1124 seen about to enter Skelthorne Street Bus Station in Liverpool. Indeed it was quite wonderful when I arrived there on my first proper bus spotting visit in 1963 as this still quite new and busy two level covered bus station with coaches above was literally just across the side road outside the the main Line Street Station. Other operators buses terminated in various streets in the city centre or at the large bus station at Pier Head which from the public point of view was miles from anywhere down by the river and just a terminus. When I photographed this bus in the mid-Eighties little did I know that after Privatisation the Ribble Merseyside operations now re-christened North Western would be within the same management as my local company Midland Red North and these by then redundant ageing coaches like 1124 would find themselves in Cannock and Stafford and even passing my house.
Posted by christopher at 13:42