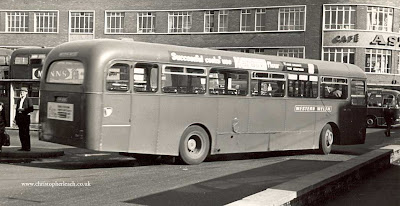 Before the advent of the so-called BET Federation same-at-both-ends single-decker operators who bought the latest newly permitted 36th long buses in the Winter of 1962-63 had them fitted with this stretched version of the current shorter bus. I don't know whether it's just that they date from those early exciting days as a spotter and enthusiast but for me they have remained an elegant classic. They certainly looked long as can be seen from this view of Western Welsh No.614 a Willowbrook bodied Leyland Leopard departing from the busy Cardiff Bus Station for Barry, one of eighteen of these buses in the fleet. In the background is another once familiar sight down here a Neath and Cardiff express coach on their regular Cardiff-Bridgend-Port Talbot-Neath-Swansea service. Brown Bombers as they were affectionately known this was one of seven Harrington Cavaliers in this predominantly AEC Reliance based fleet.
Posted by christopher at 03:17

I would have worked on this one. I was an apprentice at Barry depot & then a fitter at Penarth Rd depot in Cardiff.

Yes I liked WW. That first early morning in Cardiff I caught a bus to Barry and the yard was full to the brim with single-decks and I got back to Cardiff again for the latter half of the morning rush-hour. On the second night-time visit to Cardiff they offered to let me sleep on one of the buses in Penarth Road Depot, I chose AEC Regent 680 because it had a long bench seat downstairs at the back. The adventures I had in those days! Okay I was mostly taking numbers and bus photos but what do teenagers do today with their free time...