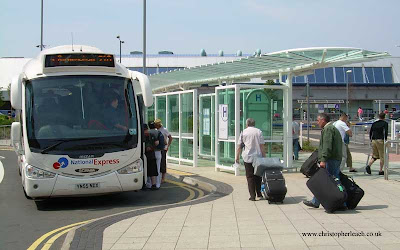 Serious bus crashes in the U.K are infrequent but always make the news headlines so they stick in the public conscience. Unfortunately today National Express suffered it's second similar coach overturning incident when rounding a corner to rejoin the motorway the vehicle with over thirty passengers hit a curb and toppled over. But this time it was not even a double-deck Neoplan but one of the smart flagship Scania Irizars. As for my photo the coach involved would have stopped here at Birmingham Airport less than two hours earlier on it's way working the former Flightline Service, now just 777 which links the Airports of Birmingham, Luton and Stanstead. When I used the service three years ago there was no comfort stop at Newport Pagnell Services where the accident happened which was a pity as I was dying to use the loo and didn't fancy it in the bumpy rear compartment of an otherwise quite civilised Birmingham Coachways DAF. However being cynical it might have been a good thing, but as for the cause of today's accident I heard the coach driver has been arrested for drinking. You might remember but in the early days of National Express one of the former Standerwick Bristol VRL ECW coaches also was involved in a serious accident near here on the M1 when it toppled over on to the crash-barrier of the central reservation. That horrific accident alone did much to kill off double-deck coaches on National Express work and even today they are not a major contributor. As for the Neoplans of today they were taken off the road but were subsequently given a clean bill of health and that first accident last February put down once more to driver error. Of course it is still early days to point a finger and no doubt it is usually the poor old driver who gets the first salvo of accusations. No doubt we will probably have to wait five-years to hear the results of the official findings costing thousands of pounds which in the end will confirm what we learn during the next couple of days. That is how things are done in this country which is fine, the trouble is no-one ever takes any action following these mamoth reports and everyone forgets about it till it happens again.
Posted by christopher at 15:36

Anonymous said...
This comment has been removed by a blog administrator.
2 February 2011 at 05:48