The Birmingham Bus: Suits you Sir! 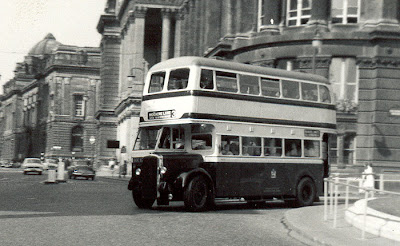 In the good old days of my childhood a town's buses were seen to be an important utility and like everything else owned by the Council a part of it's unique identity, heritage and of great Civic-Pride. No bricked-up toilets and vandalised parks in those days.With his engineering qualifications and sometimes large budget the General Manager of a bus company was an important individual who could tailor the fleet to his exact requirements. The biggest operators like Birmingham City Transport often ordered buses in the hundreds and even though he had to order a basic design there seemed no end of possibilities towards changing the specification or showing the way ahead with modifications and extras. Of course to make their mark some managers satisfied themselves with just smaller detail changes to suit their tastes like altering the destination screen layout or graphics and livery but Birmingham, Britain's Second City, with it's fair share of slums and dirty industry ordered buses that had a half-timbered feel and looked a bit like a country cottage on wheels complete with a beautiful traditional dark and cosy interior fitting of a city that was still known as the Workshop-of-World. Indeed all that seemed missing was the upright-piano and roses around the door. Likewise in those days mechanical things were a part of a man's world and of course for little boys and buses looked all the better for it. Elegant and beautifully proportioned No.I621 a Coventry built 1947 chrome-fronted Daimler CVG6 carries an MCW body built in the city at Washwood Heath. Many years later right up to the end of the Eighties Birmingham buses in the shape of the Metrobus would still be built by MCW and powered by Gardner as in a sense everyone who had safely come through The War believed it would. Today all that is forgotten and cast aside as my memories of Yesterday has become rather unbelievable rather like the story line to some Ealing Comedy. The trouble is it all seems rather like yesterday and I half expect to still find a BMMO D9 heading for Wolverhampton and Birmingham on the 196. Now that's another local big bus company I had almost forgotten about.
(As if!)
Posted by christopher at 11:08