At it's Best: Chester City Transport 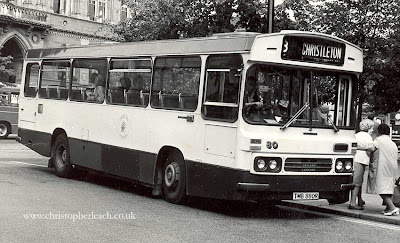 When it came to turning out stylish modern coaches Duple might not have been able to keep up with Plaxton's insurmountable lead with it's Plaxton Panorama which lived on till the end of Seventies under different guises. Indeed like all great designs they could only improve it so far before spoiling it's magic. But Duple's Dominant range which probably was the concerns best effort certainly hit the jackpot with it's service bus variant. I see this nicely proportioned bus with it's attractive front dash, large side windows and airy feel as something of a classic to match that earlier gem from the early Fifties the Saunders Roe or as it was better known Saro. Usually that earlier bus was built on a Tiger Cub chassis for the BET Group and Ribble was the best known user and maybe yes I will show one here in a few days once I scanned it. Chester City Transport had always needed a few single-deckers but by 1979 the proportion of them in this fifty vehicle fleet grew to sixteen. Apart from one remaining Tiger Cub, all were Leopards mostly with Northern Counties bodywork but the last six 75-80 TMB 875-880R were by Duple. Another interesting fact I spotted and never realised before but at this time the operator had no second-hand stock and was running a fine fleet.
Posted by christopher at 11:12