Stratford: Switch off that Mic or watch thy tongue-The pitiful sonnet of the cursed Sierra Man 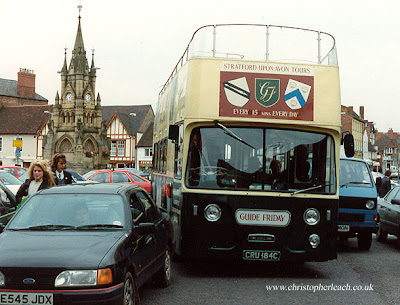 A damp day and the thoughtlessness of Sierra-Man conspires to make old Merrie England not so merry. Stratford on Avon in 1990 and even though Guide Friday seemed very partial to former Nottingham Leyland Atlanteans for it's open-top tour fleet there was plenty of other interest too like this former Bournemouth Daimler Fleetline with Weymann convertible open-top bodywork. In their former Hampshire hometown these ten buses had been named after English Counties with No.184 being Cheshire, but had they chosen No.182 instead they could have had this one Warwickshire, the Shakespeare County. However like the world famous bard who hailed from this small Midland's town so did the operations of Guide Friday and in it's own way it became just as famous as it's distinctive open-top buses trundled around the seaside towns and interesting cities of not just the the UK but far away right across the European Mainland too.
Posted by christopher at 05:14