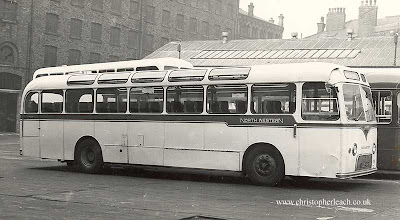 North Western turned away from Leyland at the end of the Fifties and didn't buy any more buses and single-deckers preferring AEC, Daimler and even Dennis. However new Leylands still played an important part in the company as the powerful Leopard became the choice for it's coach fleet. There were proper coaches too but most of these were Alexander Y-type express coaches whose fleet grew rapidly with the intake of ten per year. In 1962 though before it's introduction the following year North Western uniquely took ten with an earlier style of Alexander body already to be found on 1961 AEC's which was now stretched to accommodate the newly permitted 36ft length. I travelled on one of these in later years on service and they didn't feel all that glamorous, indeed inside No.907 was an untidy dirty looking flap hanging down across the front destination-box cover which wasn't very nice. The last two of the batch 915 and 916 came equipped with forced-ventilation which became standard on the NW Y-type. If No.907 on bus work between Macclesfield and Stockport in 1966 was anything to go by these would have been popular vehicles with the crews as these 0680 powered Leopards could certainly motor. This vehicle is pictured at Lower Moseley Street Bus Station in Manchester and also to be seen in the background is the roof of the tiny all coach Ribble garage with just a couple of pits in Great Bridgewater Street. Being coaches only the allocation was of twelve but as you can see most vehicles were parked outside like the Atlantean 'White Lady'. This view was taken in about 1970 and of course all of this including the bus station is now sadly long gone.
Posted by christopher at 15:29