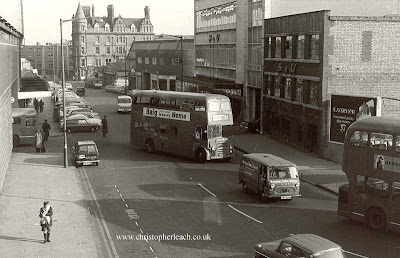 One of the saddest things about the new National Bus Company in 1969 was that it did away with all those characterful small company units that made the BET Group so interesting. It was said one reason for retaining them was that it found them useful for management training. For a short while though the Leyland Titan PD3's inherited from it's small forty-bus satellite Stratford Blue did add a bit of variety to the Midland Red fleet that had not too long ago withdrawn the last of it's 100 LD8 Leyland PD2/20's of 1952-3. However buses like the former No.6 now 2006 seen in Birmingham did not stay long as these Willowbrook double-deckers were quickly sold off to the Isle of Man. But the Titan was again to return to Midland Red when Harper Brothers of Heath Hayes sold out to the NBC.
Posted by christopher at 12:47