Hey Wack: It's a Wacky Racer! 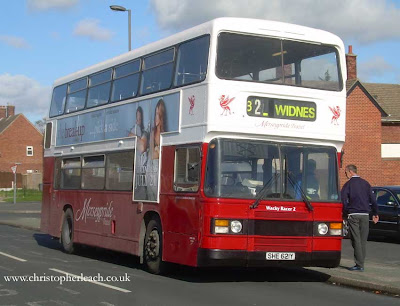 In Liverpool addressing someone as Wack or Wacker is regarded as a term of endearment and calling this bus a Wacky Racer is very much typical Liverpudlian humour. There were two of these ECW bodied Leyland Olympian double-deckers running through the large housing estate at Speke on the route to Widnes when I was killing time close to the Airport in 2006. I don't know if this was the Independent operator Merseypride Travel's official livery but a very similar scheme was worn by them when they were with their previous operator Yorkshire Traction who had bought them new in about 1981. For much of the 80's these Gardner engined vehicles had been the National Bus Company's standard fare and once very common but by this time they were getting quite rare so they were certainly a pleasing sight in the sunshine.
Posted by christopher at 14:55