Stagecoach Stripes and First Barbi-2 too 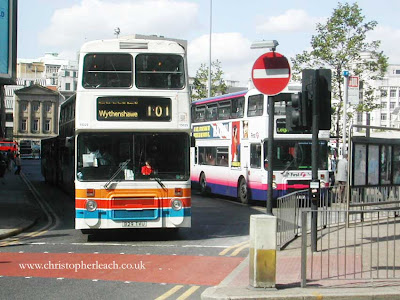 it's surprising how over time we not only got used to those Stagecoach Stripes and indeed almost grew fond of them especially as the company always kept it's buses clean. But that admiration was not always the case for as Suter's pushy Scottish empire spread across the land like a plague it tore from our buses not just their former identities but a whole range of attractive Municipal and Company liveries including many real favourites like Southdown and Alexander Midland. Greater Manchester was lost too as the Southern and Eastern part went to Stagecoach whilst in area terms at least the far greater North and West went to the First Group. Although these former Manchester buses look the same because of their handsome Northern Counties bodywork the white bus was one of the smaller fleet of Dennis Dominators whilst the Barbi2 bus bound for Leigh was a once ubiquitous Leyland Olympian.
Posted by christopher at 04:28