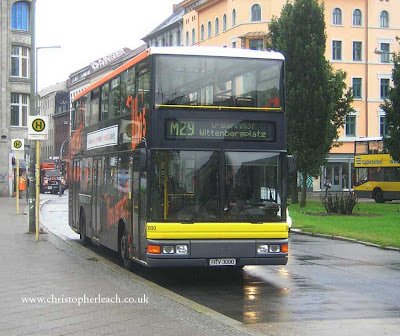 It's amazing how some buses manage to elude you. No.3000 arrived in Berlin in 1995 and not only introduced the brighter new look livery still worn today that replaced the rather dreary all-cream hue this was the prototype for a new generation of dual-stairway MAN double-deckers for BVG. These high-capacity buses tended to work busy central area routes terminating at the Zoo including the busy tourist No 100 service route taking in the most famous landmarks such as the Brandenberg Gate and the Unter Den Linden. I don't think they were particularly successful and only about 86 were built and following them no new deckers were delivered for another ten years leaving much of the outer areas without them completely. For much of it's life this bus was allocated to Indra Gandhi Str Garage in what was East Berlin and by rights I should have seen it many times. It did turn up one day but with the sun being behind it I had exposure problems and had to bin the photo. But now ten years old in 2005 it had moved garages to Cicero Str in Wilmersdorf and travelling the other way I finally saw it parked up having done a short working on my brother's route the 129 at Oranian Platz or as my brother calls it Orangutan Platz. So at last I got my photo and took a ride on it too which was interesting as there were plenty of detail differences between it and the production buses. But I didn't see it again on that visit, and neither did I see it last year, and by next year when I go it may be gone as all the Berlin double-deckers are being replaced by a second batch of 200 three-axle jumbo MAN Lion double-deckers.
Posted by christopher at 14:28

From what I gather, BVG do not like double deckers at all. Berliners, however, love them. So it is only in bowing to public pressure that BVG still operate any at all. This would explain the relatively small batch sizes and long gaps between orders.

Hi Cirdan, I'm sure they do and for all the visitors it's the best and cheapest way of seeing Berlin. BVG can't deny though that they really need double-deck vehiclesd as on the busy central routes like the 100, 119 and 129 they travel mostly full. Travelling on a single-decker, it's almost as boring as the U-bahn. Okay the trains might be quicker but not for me as I always miss my connexions and get myself lost. I hate them.

I was in Berlin a few months ago and i just loved the oportunity to ride a double decker again, it was very nice, it gave me the chance to remember the old Lisbon days, with Daimlers still working around the city center.. saddly, they are all gone from here. I miss traveling right in the front seats, with the trees branches hiting the windows of the bus... magical days..