The Delights of Cardiff: AEC Regent V No. 408 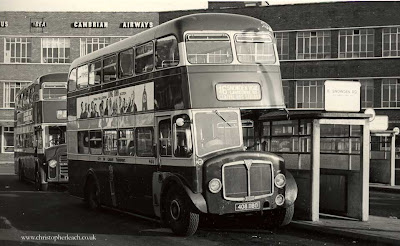 Cardiff in the Sixties was a pretty interesting place anyway as not only did it's importance attract any number of interesting Welsh operators including other Municipal fleets the Corporation had a wonderfully mixed fleet of buses. I imagine whereas many concerns tried to standardise on perhaps a couple of favoured manufacturers to keep the prices keen or often even just one, Cardiff must have been that little bit more cost conscious and had a policy of putting both bodywork and chassis orders out to tender. As you can see AEC got a share too supplying AEC Regent V's plus some Bridgemasters in the early Sixties. This bus carried East-Lancs bodywork and No.408 of 1963 is seen basking in the early morning sunshine. On that occasion I had hitch-hiked down to South Wales to visit a friend who was working there but I didn't know he was ill in bed in Birmingham. I found myself there at night with little money and rather than walk the streets all night someone suggested I go down to the Salvation Army Hostel. Apart from all the old gentlemen not snoring together and being out of tune it was rather like sleeping in a school dormitory again with those wooden floor-boards and coarse woven grey blankets. The only other difference was at school they didn't kick you out on to the street at 6am at the same time as the first buses started to appear but I wasn't complaining!
Posted by christopher at 15:11

Nice pic. Have not seen many of the old girl at work.