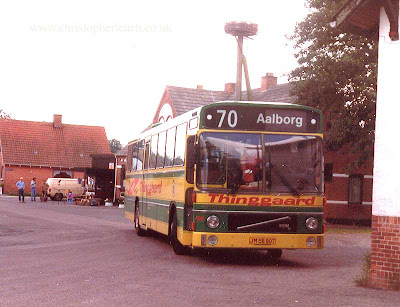 The last time I was in Aalborg I camped as usual in my van as I toured as many small towns in Jutland as I could photographing those lovely DAB and Volvo Danish buses in their many bright and attractive liveries as they were a big favourite of mine in the Eighties. I was befriended by this driver called Dan who worked for Thinggaard and not only did he invite me for a meal cooked by his wife and they put me up for a night at their home where we also watched a Big Foot Movie, I was taken as his guest on Thinggaard's main bus service the quite lengthy No.70 bus journey to Thisted a small town made less accessable and unreachable by any direct route because of the huge LImfjorden Fjord which meant the bus left at 14.00 and took a whopping 140 minutes. The best run of the week though I was told was a non stop run back from Thisted at Eight-0-Clock on a Sunday Night for the back-packers which in comparison took a modest hour and a half. As his duties at the weekend at least included dropping off the newspapers and I think the odd parcel here and there, there was plenty of time to alight to take the odd photo including this common phenomenon the village cranes nest. I think like storks they must be considered lucky, anyway I think that was what I was told at the time. Like many wonderful things they seem to crop up in European Folklore unlike buses of course.
Posted by christopher at 14:24